A new poster for Fear The Walking Dead, a prequel spinoff series of The Walking Dead has been released. The new series will take us back to the beginning of the outbreak, offering us a look at the early days of the infection. It’s an ominous poster, showing a couple of kids playing basketball, while a lurking walker stumbles towards them. An obvious metaphor for the creeping infection which is approaching society unexpectedly, it supports the earlier trailer’s idea of “nature always winning” and the media’s inability to cover up what’s happening. Thank goodness for social media!

Have a look at the poster below and, also, have a gander at the official trailer which was unveiled at SDCC this week. It looks and feels surprisingly different to The Walking Dead; the location is a bustling city so is automatically a contrast to TWD’s tight-knit team. Also, the visual style is vibrant and vivid, rather than opting for the washed-out dystopian look that TWD is going for. How long this loveliness will last is the question, because there are zombies on the way and they ain’t pretty. 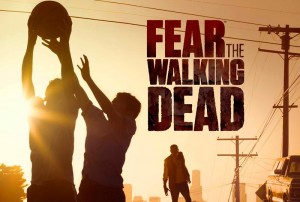 Fear The Walking Dead will premiere on August 23rd 2015.