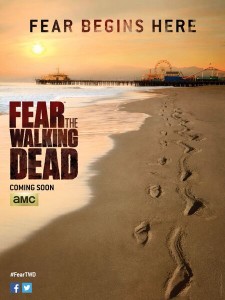 AMC has today revealed the “Fear the Walking Dead” key art which will be used to promote the show at the impending Comic-Con International: San Diego 2015, the fan-based convention which runs from 8-12 July this year.

As you are all most likely aware by now, “Fear the Walking Dead” is the eagerly awaited companion series to the smash-hit drama “The Walking Dead” which AMC greenlit with a two-season commitment back in March. In anticipation of the series’ August premiere a Comic-Con panel will be held with the cast and executive producers this 10 July at 1:00 p.m. PT in Hall H.