Fear the Babysitter in this New Trailer for Emelie 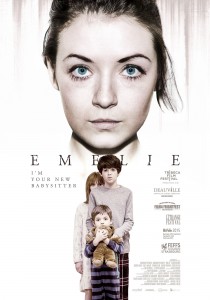 A new trailer has been released for Emelie and it taps in to the fears of every parent. Imagine acknowledging that you were unsure of leaving your children with a stranger, then to have these doubts confirmed when she turns out to be a psycho? Welcome to Emelie, everybody!

Emelie sees a couple leave their children with a new babysitter so they can celebrate their anniversary. However, she’s the stuff nightmares are made of. She forces the children to play deadly games of hide and seek, puts their hamster in a snake tank and, worst of all, allows them draw on the damn walls! She’s crossed the line with that one.

Check out the tense trailer below and see just a few of the horrors that are in-store in Emelie. Directed by Michael Thelin, Emelie stars Carly Adams, Carl Bailey, Thomas Bair, Chris Beetem and Sarah Bolger. The film has a release date set for 4th March in USA. Look out for our review, soon!