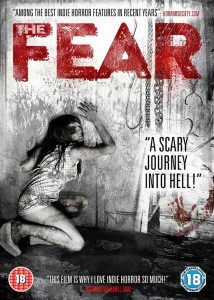 Synopsis:
Recently wed couple Mike (William A. Robertson) and Marisol (Andrea Vahl) are being shown around a property by a realtor (Monique Parent). Their potential new love nest however has a shady past; one that they are about to learn about in three ‘terrifying’ tales.

With a welcome renaissance of horror anthologies of late – most I might add of a very high standard; V/H/S, ABCs OF DEATH, LITTLE DEATHS and even last month’s excellent ALL HALLOWS’ EVE, it was only a matter of time before mediocrity entered the fray. One thing that THE FEAR aka THE PERFECT HOUSE can be noted for however is having the accolade of being the first movie to premiere on Facebook. When co-director Kris Hulbert was let down by a group of money-hungry producers he resorted to his back-up plan of the social network – and with a platform called Flicklaunch about to launch it seemed like the perfect opportunity to grasp some publicity. Alas this ground-breaking scheme didn’t pan out as they’d hoped with a series of glitches hindering the initial awareness.

Beginning nonsensically with a portion of the third tale before spinning back to the wraparound, THE FEAR is an exasperating experience with its tactics of provocation woefully misjudged. The first tale – The Storm – sees a dysfunctional family of four rooted in their cellar to escape an impending downpour, though as the night progresses infighting and conflict give rise to a battle for survival. Shot with a washed out colourless hue, this chapter initially piques your interest albeit only to descend into a poorly paced yawn-fest which misses the opportunity to create stark tension with its intriguing narrative.

The second chapter, billed as an 80s style slasher homage fares little better. As serial killer John Doesy (Jonathan Tiersten) persecutes the male prisoner in the basement, his newly found muse – also imprisoned – looks on. It’s a torture piece, and a boring one at that as we endure Doesy slicing the eyelids off a victim and churning out boringly offensive diatribes to his female captive. It’s a reprehensible piece of filmmaking that sadly only signals the halfway point in the feature.

After teasing us at the start of the movie with a scene from the Felissa Rose starring final portion, there were hints of something quite promising, but by the time we get to endure this chapter it wallows in an orgy of tiresome gore that abandons an intriguing narrative in favour of shock value dreariness – an observation that underlines the issue with the film as a whole. The great anthologies are savvy, breezy, concise portmanteaus of brilliance – seamlessly blending each chapter into another. THE FEAR achieves none of this, succeeding only to disengage the viewer, and leave us bored and nauseated at what we’ve chosen to endure.