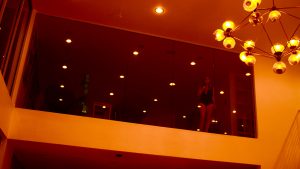 Simon Rumley has been silently, but assuredly, cementing his name as one of the UK’s premier auteurs since his debut Strong Language back in the year 2000.  However, it wasn’t until 2006 when he unleashed the disturbing The Living and the Dead where the horror community would take notice and embrace him as one of their own.  Rumley’s genre fare is difficult to categorise; while his films do tend to incorporate horrific elements, they’re not quite full-fledged scare fare.  That said, the films he makes tend to appeal primarily to those who appreciate cinema with dark sensibilities, and Fashionista is yet another genre-bending gem.

The story revolves around April (Amanda Fuller), a clothes addict who uses fashion as a crutch for her insecurities.  She co-runs a second-hand boutique with her husband, Eric (Ethan Embry), and dreams of the outfits she’s going to wear the next day.  If she can’t find her dream t-shirt she’ll become neurotic.  Then one day she catches her husband cheating with her best friend, which leads her to meet a rich playboy who lets her spend extravagantly in exchange for her courtship in his bizarre sexual games.  As events unfold and become more disturbing, April must face reality and learn to see herself how the world sees her.

Fashionista is a mind-bending psychological thriller in the vein of Nicolas Roeg and Nicolas Winding Refn, with a hint of David Lynch.  Rumley deconstructs typical storytelling narrative to create a jigsaw puzzle, with enough pieces left out to allow the viewer to make up their own mind.  The film excels through its portrayal of jealousy and lack of self-confidence, while exploring the idea that we see ourselves differently than our peers do.  Additionally, it investigates the power our image holds over some people, and just how detrimental that can be. 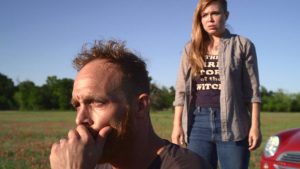 Fashionista is a movie that needs to be seen and yet another bold triumph from a filmmaker who’s rapidly becoming one of the most original voices in genre cinema at the moment.  Like Rumley’s career until now, Fashionista is unpredictable, daring and special.  Don’t be surprised if this movie makes the world take notice either.