Sometimes when we smile, what’s going on underneath is anything but cheerful. That’s certainly the case in Smile, the feature debut of writer-director Parker Finn, which world premiered at Fantastic Fest in Austin last week.

The film follows Dr. Rose Cotter (played superbly by Sosie Bacon) who, after witnessing a bizarre, traumatic incident involving a patient, starts experiencing frightening occurrences that she can’t explain. In a desperate attempt to understand what’s happening to her and stop this curse before it’s too late, Rose teams up with a cop, Joel (Kyle Gallner), to investigate—exposing a chain of horrific suicides that she is now shackled to.

Smile is a film about trauma, specifically the way that trauma perpetuates itself by hurting those around us. In the opening scenes, we learn that Rose experienced a traumatic incident as a child and now dedicates her life to trying to help those affected by mental illness. But she hasn’t dealt with the metaphorical demons of her past, leaving her uniquely vulnerable to the very real one that will soon enter her life. It’s notable that the two central characters in the story are a mental health professional and a cop, two professions that involve frequent exposure to trauma. Rose cannot take care of others without first taking care of herself, yet as we learn, she has stopped seeing her therapist. 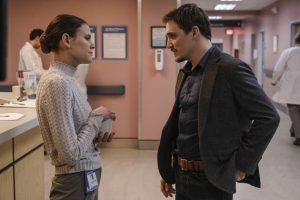 Comparisons to 2014’s It Follows are inevitable, with Smile’s demon assuming the appearance of loved ones to get close and further traumatise. The film even goes so far as to repurpose one of It Follows’ most terrifying scares—one involving a sudden size change—though to lesser effect. There are also shades of The Ring here, though Smile introduces an ambiguous deadline. No one has made it past a week, Joel informs Rose, but some have died after just four days. The unease deepens as we realise that Rose’s time might be up at any moment.

That sense of creeping unease is amplified by the sound design, which balances the discordant plucking of the score with long periods of silence as the camera slowly pans. In fact, Smile is at its best when it’s quiet, such as during a standout scene in Rose’s sister’s home. As family and friends sing happy birthday to her nephew, Rose zones out, the smile slipping from her face. She is unhappy in a roomful of happy people, the perfect set-up for the demon to make a dramatic appearance.

But scenes like this are few and far between, with Smile leaning a little too heavily on loud, familiar jump scares in between to ever truly reach nerve-jangling territory. The bizarre choice of end credits song, too, detracts from the painful note the film ends on. It’s a movie that can’t seem to decide whether it wants to be a fun popcorn flick to watch with your friends or a psychological haunter. Where it ultimately lands isn’t half bad, but it could have been so much more.

Smile releases in theatres on the 30th of September.