The story centres around Simi (Nina Katlein), an overweight teen who travels to the remote home of her aunt Claudia (Pia Hierzegger), a professional nutrition coach, hoping Claudia can help her lose weight. While Claudia initially refuses and seems displeased that Simi is intruding on her family’s Easter celebration, she eventually agrees on the condition that Simi sticks to her stringent rules. But Simi’s delight at having the support she needs quickly sours as the family dynamics in the house worsen and she learns what diet Claudia has in mind.

Family Dinner is an exercise in unease, with Hengl establishing an oppressive atmosphere in the house that becomes suffocating by the end. Simi’s discomfort with her own body, especially as the hunger pains set in, is exacerbated by the feeling of being an unwelcome guest in an unfamiliar home; we get the impression that she doesn’t know her aunt very well, and her cousin Filipp (Alexander Sladek) acts increasingly hostile. The wild card is Filipp’s stepfather, Stefan (Michael Pink), whose kindness toward Simi is called into question as a Hengl introduces an uncomfortably sexual undercurrent to the relationship.

The setting also contributes to the disquieting mood, with the film using silence to convey the extreme isolation of the family home. The house itself is painted in chilly blues, only ever feeling warm and inviting when it’s time for dinner. But there’s always something performative about it; Claudia labours over elaborate meals but doesn’t eat them, sitting back with a glass of water to fast while the steam rises from the food in front of her. 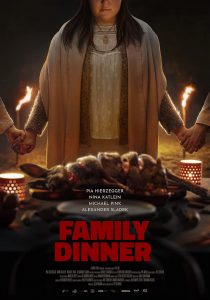 Hengl’s script taps into the cultish nature of wellness personalities, with Claudia’s seeming expertise masking her narcissistic and dangerous delusion. Hierzegger oscillates between the warm, helpful face she must wear on TV and something much darker, tinged with manipulative violence and sneering, judgmental cruelty.

This all culminates in a predictable climax that doesn’t go as far as it feels like it should. A glimpse of something shocking isn’t enough to prevent the ending from falling flat. The slow-burn horror is intriguing, but Family Dinner never fully ignites.