Fant Bilbao is warming up those engines once again and preparing to unleash the Kraken for the 23rd Edition of the city’s popular genre festival. Organised by the Bilbao City Council and running from 5-12 May, the festival comes packing all those strands that regular attendees are more than familiar with by now; most noteworthy being the Official Feature Film Section and “FANT EN CORTO” (the short film strand).

Festivalgoers and this year’s jury alike will decide on the Best Short Film, with a € 3,000 prize at stake, whilst the Jury will also vote on the Best Basque Short with the winner taking home € 2,000 in prize winnings. Submissions for both shorts and feature films are still open until the 15th of March so you’d better act fast if you intend to apply. 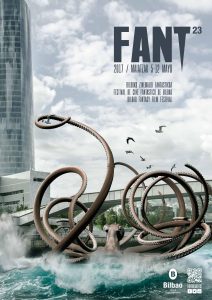 As always, other FANT awards will include Best Feature Film in the Official Section, the various Panorama Strand Awards and the coveted FANTROBIA Award which, each year, is bestowed to advocate the talents of an emerging genre filmmaker. Previous FANTROBIA honours have gone to the likes of Can Evrenol (Baskin), Jorge Dorado (Anna) and Macarena Gómez (Shrew’s Nest).

This year sees the welcome return of the Fake Trailer Contest, sponsored by the genre TV channel DARK, part of the AMC Network. FANT is currently welcoming fake trailer submissions until the 7th of April deadline, and the rules are simple: The trailer can last anything up to a maximum of 3 minutes and must tease a genre movie that DOES NOT exist.

The 2017 jury will award the winning fake trailer with €1,500 whilst the audience gets to choose the runner up, which will take home € 750 in prize winnings.

Head on over to the festival website here for all details on how to enter and SCREAM will be back with news of the full FANT lineup and guest list as soon as announcements are made. Watch this space…

In the meanwhile, we’ll leave you with Jackson Stewart’s perfect retro fake trailer for a Beyond the Gates board game to get your creative juices flowing to enter the aforementioned contest…