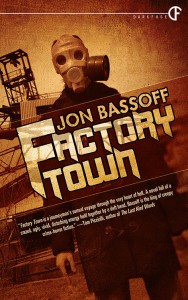 First off, I was really looking forward to this, I thought Corrosion (Jon Bassoffs previous novel) was excellent and recommended it to several friends. First thoughts I had to agree with the surreal voyage bit from the synopsis, my only problem, it just got weirder and weirder to the point where 40% in I’d lost all hope and just batted out to end, which couldn’t come quick enough.

The story follows Russell Carver, seemingly new in Factory Town as he searches for Alana, his daughter, in a town of sin, a town of madness and a town of debauchery. It soon became apparent that this trip involved various random encounters with various random people and a tale that spends more time going sideward, backward, in fact any direction except forward.

The gist of the story is that the city is run by someone called the cowboy, whose edict is too kill all the children, so that this town of scum can die with this generation. You see this town was built by the worst of the worst, the murderers, the rapists and the paedophiles and it must die with them.

There was several Alice in Wonderland moments as Russell whose insomnia ridden fragmented memory chances upon a woman he recognises, turns out be his wife and they meet on top of a building as a bunch of people commit mass suicide by hurling themselves off it. They then crawl through a crack in the wall and come out in, wait for it, suburbia, back to his street and his house. I was seriously lost at this point.

Another one was when he eventually gets inside the main factory of Factory Town, hot on the trail of Alana and discovers a passage in the depths of the place, he descends a ladder that goes on forever and comes out in a valley where the sun is just rising. I thought I was losing my sanity never mind the bloke in the story.

There’s loads more of that sort of stuff as Carver flits back to his childhood and gets drilled through the head along the way but sorry to say, at the end of the day this story was just too weird and totally mad. The author blends a dark and gritty atmosphere with a surreal vision, the actual stuff that happens, the tale itself is hidden behind veils of dreamlike narrative, the characters represent different components of the protagonist’s life but they intermingle with the character himself which makes it difficult to understand. It’s a hard read, I think there’s some reward here if you’re willing to work hard but I only got the story after the author explained his vision for the benefit of those that didn’t understand, and that is where the whole thing trips up.