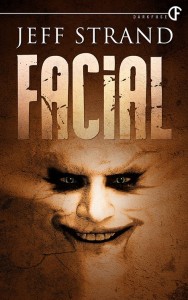 As bizarre goes this is pretty fucking weird in places but it’s all held together with the glue that is laughter and it’s hilarious in places. And what a spooky cover but it soon becomes apparent as to what’s going on amid the imagination of someone who must have had something slipped into his drink as he embarked on writing this.

Carlton finds something totally freaky in his basement that leads to him confiding in his brother and then commencing a gargantuan killing spree that’s never going to end in a good place. Greg is the other brother and the one we meet first as he shoots a hitman in the head, saves him paying a second instalment on a debt but the only problem… gotta get rid of the body. This is where Carlton comes in as suddenly he’s after a dead body. Amazing coincidence.

Felicia is Greg’s wife and she cheats on him relentlessly, the first time we meet her is damn funny as she is just about to receive a facial (yes of that variety but not really related to the title of the story) from one of her lovers. I underlined a quote from this scene but, no I shouldn’t put it in, Ah go on then, you talked me into it.

Just as Chester is about to unload both barrels, so to speak, she’s tired of waiting and says:
“You’ve got 10 seconds”
Chester nodded “Ten…nine…eight…seven…”
“Please don’t do a countdown”

Greg & Carlton then set about killing all her past conquests, right up to the point that she cottons on to their little game and the rules change.

Some of the dialogue is wicked and the more I think back, the more I kind of liked it, if you can bend your mind around the weird bits this has a certain reward for you.