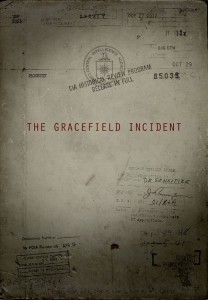 The Gracefield Incident is the latest POV-shot film in a string of titles that seem to be marking the beginning of a new trend in horror. The unique premise here though, is that the story is told through the perspective of a camera embedded in a prosthetic eye. The bridging point between yesterday’s found footage and tomorrow’s POV horror, perhaps?

Three years in the making, the alien-based horror is a true labour of love for writer/producer/director/editor Mathieu Ratthe, who also stars in his film. Says Ratthe of his creation: “After 24 months in Saguenay, Quebec, Canada, living in my parents’ basement (where my Dad and I built a studio especially for this), I got it done. As I take a deep breath, I now shift my focus to the next step in my journey. Finding a home for this baby.”

Synopsis:
Matt, a video game developer, embeds an iPhone camera into his prosthetic eye to secretly record and document a weekend with friends in a luxurious mountaintop cabin. The weekend takes a terrifying turn when a meteorite crashes the party, forcing everyone to face the darkest, screaming nightmare while somehow connecting life, love, and loss in a twist of fear.

Check out the first teaser below. It may be just 30 seconds long, but it doesn’t seem unreasonable to think this could just be the next Blair Witch or Paranormal Activity in terms of a micro-budget indie horror taking the world by storm. Early days yes, but I’m sure I’m not alone in thinking that this looks pretty fucking special.