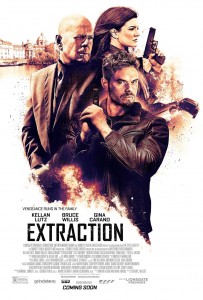 Synopsis:
To prove that he has what it takes to make it as a CIA agent on the field, Harry Turner (Kellan Lutz) ignores protocol and carries out a personal rescue mission to save his kidnapped father Leonard Turner (Bruce Willis).

Extraction is as formulaic and predictable as action thrillers come; the underdog seeks to prove his worth by embarking on a solo mission that will, ultimately, lead to his acceptance. Along the way we’re greeted with bold fighting sequences, slick car chases, foul-mouthed villains and, also, a badass female – who could give Black Widow a run for her money – side-kick and love interest for Harry. There’s a plan to infiltrate the government and a dead wife and mother looms over the plot, driving the actions of both Harry and his father. It’s a paint-by-numbers and simply structured piece of action cheese, but it’s far from terrible.

It lacks when compared to recent stylish thrillers like John Wick – which showed that less is more, but there is definitely something to be enjoyed in the pleasing visuals of Extraction, at least. What it misses in terms of plot and story progression it makes up with its mostly slick editing style and glossy finish. Neon blues and pinks add a touch of sophistication to darkly lit scenes that are coupled with an electronic soundtrack. On a most basic visual level, this is a well-shot action feature with some impressive cinematography. Steven C. Miller clearly understands that action flicks can incorporate pleasing visuals to heighten their appeal and Extraction certainly embodies this idea.

It may not be filled with an abundance of surprises and there is an unwelcome absence of grit and any hard-hitting violence, but this isn’t meant to be a blood-soaked Tarantino flick. The focus is on Harry and his unstoppable determination. As a character piece, this may not be the most unique exploration of a guy driven by the death of his mother and, overall, seeking the acceptance of his father, but it’s got plenty of heart and credibility. When compared to some of, say, Liam Neeson’s recent action endeavours, it’s easy to class Extraction as pretty solid. There may be nothing ground-breaking in its formulaic storyline and predictable plot, but there’s a level of enjoyment here that is sadly missing in a few recent mainstream thrillers. 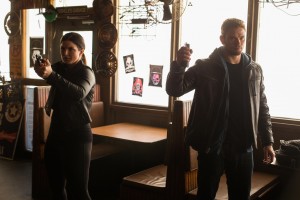 There are fighting scenes a-plenty that do not reach the top level of excitement, but they are choreographed well enough to keep you almost at the edge of your seat. Bruce Willis, who is the apparently star of the film, is criminally underused. He’s not necessarily known for his emotionally-driven performance, but he only makes an appearance at the beginning and the end of the film. It would have been great to see him back in a really badass role, but Extraction is definitely not that. Alas, this does give Kellan Lutz a time to shine and prove he has what it takes to be an action hero, even if the idea of Brice Willis being kidnapped is a little hard to comprehend. Even if you aren’t left wondering who’s going to come up on top, Extraction is an easy-watching popcorn flick that will be an overall entertaining 90 minutes.

All in all, if you’re after something unchallenging on a Saturday night then you could do a hell of a lot worse than by putting on Extraction. It’s got guns, fights and a touch of romance, but misses that edge that could have set it above the rest. If you want something with a bit more bite, then this is not going to satisfy your cravings.