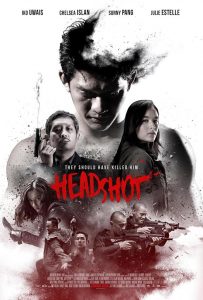 An explosive and action-packed trailer has landed for Headshot from directors Kimo Stamboel and Timo Tjahjanto, collectively known as The Mo Brothers. The pair most recently directed the hard-hitting thriller Killers (which is EXCELLENT, may I add), as well as 2009’s horror Macabre. You may also recognise Tjahjanto’s name from the icky ABCs of Death Segment ‘L is for Libido’ which is probably one of the strongest stories from the franchise.

Following a man with amnesia and a head injury, Headshot stars Iko Uwais as he gets nursed back to health while slowly remembering the past he thought he’d forgotten. The trailer looks absolutely incredible and features jaw-dropping fight scenes, violence and action sequences. With the star from The Raid and The Raid 2 at the centre, it is no surprise to see that the film looks packed with awesome fight stunts and a flair that can only come with Indonesian cinema.

Headshot will be released worldwide on 3rd March, so prepare yourself and check out the trailer below.