Synopsis:
Typical teenage girl Victoria (Tara Marie Kirk), dabbles with a Ouija board, summons a demon and then goes and gets herself possessed. As the demon buds inside her, Victoria develops devilish attributes and threatens the lives of her family, prompting older brother Glen (Rollyn Stafford) to summon a priest in the hope that he will perform an exorcism on his potty mouthed, crispy-skinned sister.

So far, so familiar, but despite the similarities to William’s Friedkin and Blatty’s film and novel masterpieces, Exorcist: The Fallen isn’t initially too direct a riff on the 1973 classic. For the first act, writer/ director Garrett Benach summons a soupçon of unease via dark, surreal visuals, rugged camera work and a fragmented score by Torrey Richards, garnishing the demonic facets with a solemn, abstract air and edge. Sadly, production blunders and plot parallels surface throughout its latter half to make the film resound as nothing more than just another rip-off and, despite its quirks, Benach fails to deliver the fresh and stirring possession horror he promised in the set-up. Throughout its confrontation, Exorcist: The Fallen mechanically unravels derivative terror/ suspense scenes before crumbling into an incompetently plotted hotchpotch, lazily mirroring the narrative of the masterpiece that inspired it.

An erratically creepy but proverbial intro works well as a priest begrudgingly asking the possessed protagonist if she will grant him the right to exorcise her, at the risk of losing her life. It’s something we’ve never seen before but a shame it’s presented within an over-familiar context for it to truly distress and resonate. The demonic manifestation is far too akin to Linda Blair’s Regan, with a nearly identical design (look, voice and character traits) that cripple both the horror and performance. The possession is conjured by way of woolly writing by Benach and pantomime play acting from Kirk, who isn’t too bad as Victoria per se but is far too histrionic when playing the monster. An off-kilter and warped air, combined with unsettling music, reverberates more like an intangible sound and is appreciated amidst the ocean of clichés. Surreal unease discombobulates throughout the set up via the aforementioned, along with an eerie and evocative, black and white opening credits sequence, featuring children playing in a park in slow-motion.

The set up introduces various supporting characters (Victoria’s friends and family) and, despite them not being too unique as individuals, grasps our attention from the outset. At this stage, Exorcist: The Fallen still feels relatively fresh. Victoria is not very likeable as a protagonist but is convincingly portrayed by Kirk. Victoria’s dad is an overworked lawyer, mum is a doctor. Both are unyielding atheists, as is their daughter. Brother Glen is a wannabe film-maker while his friend Marcus (Justin Hall) has an interest in family heritage/ demonology, judging by his Ouija board and fascination with Glen and Victoria’s late grandfather, who was a prominent figure in a devil worshipping cult. Victoria finds Marcus’ crusty old Ouija board, gathering dust behind a chest of drawers, and within no time, the kids are meddling. They then subsequently summon a chasm full of possession movie clichés which inundate the second act and demolish all the good work that went before it. 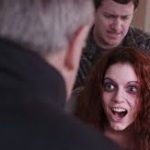 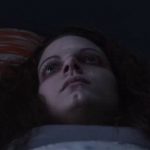 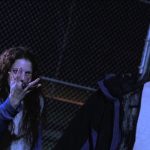 Victoria sleep walks/ talks, keeps repeating “I’m dying” and sees something scary during her part time job in a burger shack while mother discovers a creepy sketch pad loaded with demonic doodles. Soon the story loses itself in a sea of superfluous scenes featuring sappy dialogue that fail to develop the narrative or deepen our understanding of the characters. Bland, bungled horror and awful special effects sequences disentangle from the plot. Victoria goes dead-eyed, pale and poker-faced with long black hair veiling her head like Ringu’s Sadako. She then starts conversing in a monotone manner which is intended to be creepy but is simply, just infuriating, like a monotonous Goth whinge/ meltdown because she can’t find a decent well to climb out of. Despite his daughter’s iridescent red eyes and guttural old man Marlboro voice, Dad thinks Victoria just needs a good kip until the infamous catalytic, attack on Regan’s mother in The Exorcist is indirectly emulated but to a much lesser extent. Victoria simply comes on to her father by licking his neck which in a way serves as a fitting example of how Exorcist: The Fallen measures up to Friedkin’s classic. 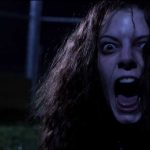 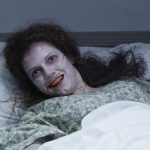 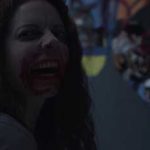 Exorcist: The Fallen is a flat-pack, vacuous dud with an abundance of latter half riffs and clichés and a story that veers into rip off terrain. It’s probably slightly better than Exorcist 2: The Heretic (what isn’t?) but a paltry production and shoddy supporting performances make it feel a lot worse than Boorman’s bungled follow-up, especially considering the pantomime performance from Marie Kirk in full on Regan rip off mode. At times Exorcist: The Fallen strives to do something different (which is commendable, even though it mostly fails) but comparisons to The Exorcist are far too prominent. Film-makers working within the possession horror sub-genre seem to be stricken with an inability to craft new ideas that don’t directly reference Friedkin’s masterpiece. Unless there is a new, interesting spin on the sub-genre, just another possession movie isn’t worthy of a green-light. In light of this, it will be interesting to see how the new Exorcist TV series pans out. Even though it’s just another spin, it’s hard to imagine it being much worse than Benach’s shifty “homage”.