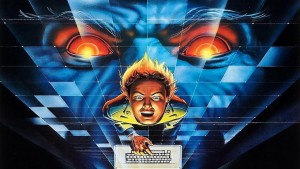 Synopsis:
Stanley Coopersmith is a cadet at a military school in which every day is a struggle for him. If he’s not getting bullied by other cadets, he’s getting grief from the staff for being a victim. When Coopersmith is made to clean out the school’s chapel basement, he discovers the relics of a Satanic cult. The unholy relics seem like a way to gain power over everyone who is tormenting Coopersmith. With the help of the school computers, he starts to translate an ancient spell book, and starts the rituals.

Evilspeak has just been restored on Bluray by 88 Films, and for many this will be a first chance to see this film. One of the many films banned on the Video Nasties list in the 1980s, Evilspeak actually stands the test of time when it comes to it’s guts and gore. It definitely has the splatter effects than are comparable to those used by Fulci in films like City of the Living Dead. It’s not an all out gore-fest similar to the likes of Evil Dead though. If Evilspeak shares a kinship with any film, it’s Carrie. 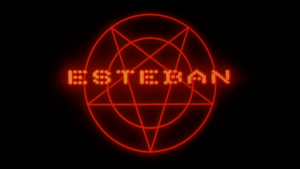 The plot of Evilspeak, with it’s lonely protagonist dealing with bullies and vicious authority figures is easily comparable to the 1976 De Palma classic. Much like the bucket of blood that sets off the psychokinetic finale of Carrie, it’s a similar act of horrific bullying that sets off the Satanic bloodbath that closes out Evilspeak. The biggest difference between the two is that Carrie is naturally gifted but uses it to violent means, Coopersmith seeks his power from Satan. It’s this choice to side with the alleged “ultimate evil” that makes the audience decide if Coopersmith has become worse than his tormentors. If this film was made today it would be pondered if Evilspeak was making metaphors about school shootings.

Speaking about if this film was made today, one part of Evilspeak that ages it is it’s use of computers. While most films that use technology will always look dated compared to the technology we use today, I think there’s a lot of charm in Evilspeak’s representation of tech. It doesn’t hurt that it’s not the main focus. It’s mostly used to get around this teenager having to learn ancient Latin and to illustrate it clearly and entertainingly to the audience. It’s a precursor to people Googling Satanic witch covens in Paranormal Activity movies. If this film was made today, it would have to address things like the internet, and it would probably end up going down some Lawnmower man style plot. Instead we have a convenient plot fix that also gives the film a unique style with it’s 80s CGI pentagrams. 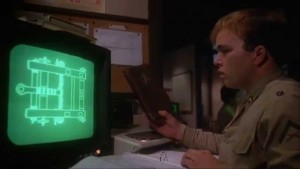 Definitely one of the more interesting films that appears on the video nasties list, and now it’s been lovingly restored by 88 Films. Their Blu-ray release includes many bonus features includes trailers, interviews, behind the scene featurettes and more excitingly, the extended cut of the film. For the purpose of the review I only watched the original cut but I’m excited to go back and watch the extended cut. With this new release, perhaps this hidden gem will be more appreciated by the horror community.