The Evil in Us Secures a UK Home Release 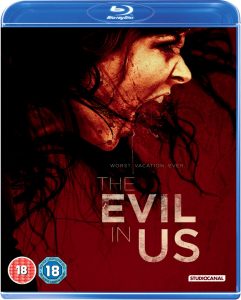 If you weren’t able to catch the gory Canadian horror film The Evil in Us at Horror Channel FrightFest in London, you’ll be glad to know that the film has secured a UK home release for this 10th October. So, you will be able to get your hands on its gruesomeness just in time for Halloween.

Synopsis:
While on a fourth of July holiday, six best friends fall victim to the insidious plan of a terrorist organisation when they unknowingly take a bio-active drug that transforms them into bloodthirsty cannibals.

You can check out the trailer for the film below which is, quite literally, an explosion of blood and gore that begins quietly, before events escalate into a wonderful onslaught of screams, violence and aggression. It’s certainly one for the gore hounds.

The Evil in Us stars David Aboussafy, Melanie Joy Adams, Chris Allen, Darren Andrichuk and comes from writer-director Jason William Lee, whose name you may recognise from a few short films that include Demons in the Dark and Dark Whisperer. It certainly looks like it’s going to be a bold feature debut for Lee and we can’t wait to delve into its bloody insanity.

The Evil in Us will be released on DVD, Blu-Ray and digital download on 10th October in the UK.