Sleepy Hollow star Katia Winter and newcomer Ashley Jones will star in maternal horror UNWANTED, which just wrapped production and is set for a 2017 release.

The film – in which Winter plays a mother who finds herself and her young daughter (Jones) targeted by an evil presence – is directed by Eduardo Rodriguez, who won himself a 3-picture deal with Bob Weinstein and Dimension on the strength of his 2002 debut horror short, Daughter, and whose feature debut – demonic horror Curandero – was written and executive produced by Robert Rodriguez. Most recently, he directed 2013’s Fright Night 2.

UNWANTED synopsis:
After the premature death of her estranged husband, Emma (Winter) regains custody of their young daughter, Isla (Jones), and hopes to rebuild their relationship after many years apart. But when an evil entity begins to torment them, mother and daughter are forced to face the inexplicable presence that inhabits the walls of their new home. 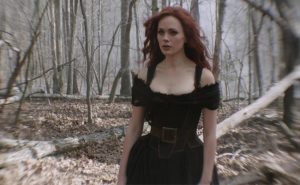