Evil Dead: The Game was tentatively scheduled to come out in February, but the team behind it has had to delay the launch. The highly anticipated title will now release in May.

“When we set out to create a brand new game worthy of the Evil Dead franchise, we knew it had to be groovy as hell,” the team explained in a series of tweets. “In order to deliver the best possible experience, Evil Dead: The Game is now coming on May 13, 2022. This delay gives our team the time they need to get things just right, so your boomstick will be polished, fully loaded, and ready to blast Deadites on that Friday the 13th of May. We thank you for your patience and understanding.” 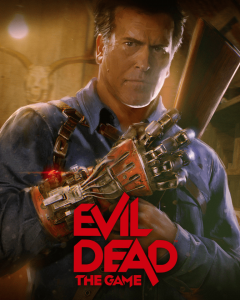 The official Twitter account for the game also noted that pre-order info and a new trailer will be revealed in February.

Hailing from Boss Team Games and Saber Interactive, Evil Dead: The Game will be available for the PC, PlayStation5, PlayStation4, Xbox Series X|S, Xbox One, and Nintendo Switch, and will feature both single-player and cooperative gameplay. Work together as a team of four survivors, exploring, looting, crafting, managing your fear, and finding key artefacts to seal the breach between worlds. Or, take control of the powerful Kandarian Demon to hunt Ash and his friends while possessing Deadites, the environment, and even the survivors themselves as you seek to swallow their souls.