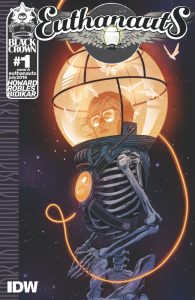 In 2003, a few years before he blew up with his genre-defying Kick-Ass comic, Mark Millar released a work called Superman: Red Son, which re-imagined what Superman would be like if his ship landed in Soviet Russia instead of the US. As it turned out, it wasn’t just the future of the Cold War that was effected, but history and science as well, among them, a discarded book hidden in the corner of a panel titled Necronaut: The First Explorer of Death by Jordon Luth. Euthanauts is what that book would’ve been about. A journey into the afterlife written by Tini Howard, Euthanauts explores our relationship with death and it’s take on what when happens when we die, all helmed by an incredulous funeral home assistant whose fascination with our earthly demise borders on obsession. Intricately drawn and well told, Euthanuats is a must read for both fans of horror and philosophy, even if you don’t plan on meeting the Grim Reaper anytime soon.

The comic follows in the steps Thalia Rosewood, a funeral assistant who loves her job but hates her friends. When meeting up with said friends in a chic uptown restaurant, her eyes can’t help but wander to a woman on the brink of death and the woman can’t help notice her either. Soon, what seems like a chance encounter between the two women becomes something much bigger when the woman brains Thalia with her oxygen tank. Suddenly, Thalia is dead. What follows is an exchange of thoughts and human ideals in the vast plains of the afterlife between Thalia and the woman, all studded with strange happenings between two orderlies at the hospital. Who are these strange individuals so determined to mess with Thalia’s existence and why is she suddenly being thrown back to earth at a thousand miles an hour?

While the first issue merely teases at exploring the afterlife while wearing a giant bubble helmet, the official synopsis does confirm that the four individuals are part of a secret group of death explorers and that Thalia has become the newest inductee into discovering the unknown. So, if you’re wondering where this comic was going, that’s where. That being said, the introductory issue doesn’t simply tell the story of how Thalia and the gang got their mystery van, but about Thalia’s (and by extension, all of ours) relationship with death and dying. Her inability to not stare at the dying woman, like slowing down at a car accident, while shyly looking away when she looks back. Or her friends, those who don’t worry about the inevitable, who tell Thalia to just not bother with her. It’s not her business. Euthanauts addresses that primal survival instincts in human beings where even a mere look in the direction of the dead could mark you off as the next victim while drawing a fine line between those who look away and those who look straight on. Of course, there’s nothing wrong with either action, after all, we will all find out in the end anyway. It’s an interesting meditation on our relationship to the world around us.

The art of Euthanauts is very clean and well defined, complete with fully posable characters that look great from every angle. This is very professional work and will appeal to even the pickiest of comic illustration fans (ie. me). On top of the perfect human figures and the excellent usage of proper angles, the extra tidbits that the artists uses to separate the real world from the world of the dead really help the work standout. As Thalia’s soul transitions from living to dead, her world begins to swim with classic death imagery, such as glowing moths, grinning skulls, and the far reaches of spaces all drawn through the eyes of modern illustration. In fact, it can almost be compared to early DC/Vertigo work, most notably Sandman, where the everyday and otherworldly frequently cross paths but never quite reach each other. Euthanauts is a fully realised comic and the accompanying art was just as carefully chosen as the message and the story, which all together, make a comic to die for. Make sure to drop this one into your comic box.

Euthanauts #1 is out in stores now!