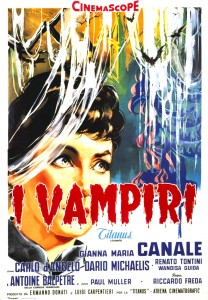 Aside from being the first Italian horror film since the silent era, I vampiri is also of note as the first work in the genre by Riccardo Freda, as well marking the directorial debut of the legendary Mario Bava.

Bava picked up the reins from Freda when the latter walked off the project after losing a bet that he could complete a horror picture in just twelve days. With the help of screenwriter Pieo Regnoli, Bava cannily rethought the main thrust of the story to finish the film in two days, with no funds.

The result is a somewhat muddled narrative that contains no literal vampires, but instead a riff on the Bathory legend, with the striking Gianna Maria Canale and her scientist lackeys kidnapping young girls and draining them of blood to return her to her youthful glory. Her main heavy is Eurocult regular Paul Muller. Canale’s ‘Duchess Du Grand’ is besotted with the reporter (Dario Michaelis) on the case of ‘the Vampire’, thanks to a past relationship with his father. Can he work out what the hell’s going on before any more bodies are fished out of the Seine?

Despite some story shortcomings and overly talky sections, I vampiri remains an engaging treat, with a lush feel belying its budget. With a great Gothic ambiance, particularly in the scenes set within the castle interiors, Bava’s cinematography and Beni Montresor’s rich production design see to it that the film looks looks ravishing throughout. 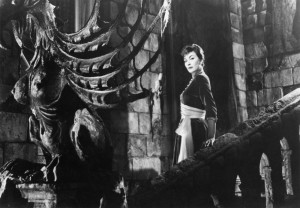 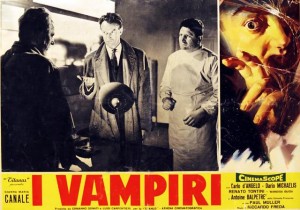 As would become usual, Bava handled the special effects too, and particularly remarkable is a scene where we see the beautiful Canale transformed into the ancient crone with an in-camera effect incredibly achieved with make-up and lighting alone. Canale, Freda’s then-wife, is mesmerising, both as the decrepit Duchess and her ‘niece’ Giselle. The scenes where Muller stalks the victims, his  black leather-gloved hands clutching at door handles, look forward to the tropes of the giallo genre, still some years away.

A commercial failure in its own country, the film was released in the US four years later in a shamefully bowdlerised form, under the title of The Devil’s Commandment and padded with shoddy American-made inserts. Some of these featured a jobbing pre-Grandpa Munster Al Lewis. Bava would also complete Freda’s abandoned Caltiki, the Immortal Monster (1959), amongst other things, before making his credited solo directorial debut with Black Sunday/The Mask of Satan (1960). Where the failure of this film represented a false start for Eurohorror as we know it, his 1960 opus would give rise to an international explosion.

Commercial flop or no, I vampiri is of course required viewing for anyone with more than a passing interest in Eurohorror and the history of fantastic cinema. And aside from all that, you get to enjoy the work of two master craftsmen of this classic period, and a decent old school horror movie to boot.