Eurohorror of the Week: The Sweet Body of Deborah (1968)

Lee Strasberg-trained American actress Carroll Baker (born Karolina Piekarski) was catapulted into A-list sex symbol stardom after appearing in Elia Kazan’s 1956 classic BABY DOLL, hand-picked by the film’s screenwriter Tennessee Williams over Marilyn Monroe, no less. Thanks to the evils of typecasting and, let’s face it, industry sexism, by ’68 she’d started to slip off said list somewhat, but back in those days there was always the ‘Hollywood on the Tiber’ to fall back on when pickings got slim. This pre-Argento giallo from Romolo Guerrieri was her first, followed most notably by a string of collaborations with Umberto Lenzi (namely ORGASMO, SO SWEET… SO PERVERSE, A QUIET PLACE TO KILL, and KNIFE OF ICE) and the title role in Corrado Farina’s sublime ’73 offering, BABA YAGA. 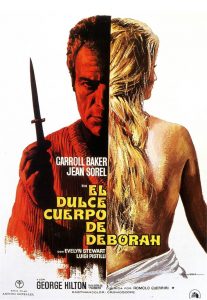 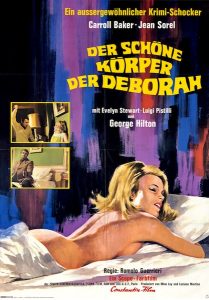 IL DOLCE CORPO DI DEBORAH finds Baker as the titular Debs, paired with another subgenre regular, Jean Sorel (see last week’s column), in the role of Marcel. They’re a newlywed couple travelling around Europe, but Marcel isn’t too keen when she cheerfully suggests they pay a visit to his home turf in Geneva. And indeed things start going pear-shaped almost as soon they get there, starting with a run-in with Marcel’s former pal Philippe (Luigi Pistilli), who hits him with the intel that his previous fiancée Suzanne (Ida ‘Evelyn Stewart’ Galli) killed herself when he’d failed to write to her after buggering off to the States.

Next thing you know, Deborah’s getting threatening phone calls, and Marcel is getting the crap kicked out of him by a bunch of local toughs that he owed money to when he left. But hey, the honeymoon must go on, so the lovers get themselves on the next flight to Nice, there to lounge around in a huge sexy villa and continue, erm, consummating. But before long Suzanne’s favourite record mysteriously turns up on Debs’s turntable, Philippe is spotted in town, and those pesky phone calls start up again. And what’s that shifty neighbour (George Hilton) up to? 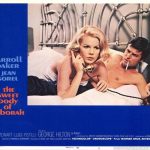 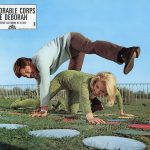 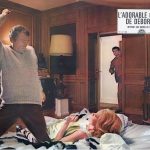 For what’s ostensibly a thriller, albeit a ‘sexy thriller’, a considerable amount of screen time is taken up with the two attractive leads lounging around in bed or by the pool, talking, and generally having a nice jet-setting time of it. If you’re new to the genre, then this certainly isn’t the place to start. For the seasoned addict, however, there’s more than enough tasty silver age Euro-pudding ambiance and clever twists to make it a pleasing way to pass 90-odd minutes. Ernesto Gastaldi’s script (look him up, his résumé is like an encyclopaedia of Italian genre film) deftly shifts viewer identification back and forth between pill-poppin’ anxiety-ridden Deborah and seems-decent-but-is-he-just-on-the-make Marcel, and the acting and direction are solid enough to make the whole affair at least halfway convincing. 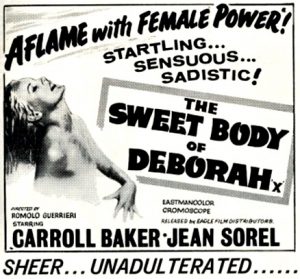 We also have the pleasure of seeing George Hilton essay a quirky supporting role, before his early seventies stint as super-suave giallo leading man (most famously in offerings scripted by Gastaldi and directed by this one’s executive producer, Sergio Martino, the brother of its main producer, Luciano), and get to witness a jolly game of outdoor Twister, with Baker clad in a green polyester catsuit that looks as though it’d set on fire were she to walk too briskly. We also visit a groovy pop-art nightclub with the words ‘Ka-Boom’ and ‘Pow!’, etc, adorning the walls. But what about all the grisly murders? Oh, never mind all that, we’re having fun here. Well, I am at least. Sorry, what magazine is this again?

Hardly the most shocking or memorable of gialli, but an entertainingly kitsch, occasionally clever, and oddly engaging melodrama nonetheless.