Look, I love this shit. All of it. Even the bad ones. Maybe even especially the bad ones. Otherwise I wouldn’t write this column week in, week out. But I always try to give it to you straight. This being the case, I’m not going to lie to you. RATS: NIGHT OF TERROR is a stinking mound of radioactive rodent droppings that even makes director Bruno Mattei’s ZOMBIE CREEPING FLESH (1980) seem like a half-decent film in comparison. Yes, really. 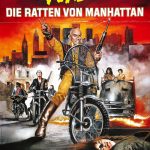 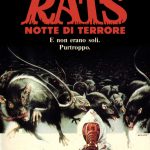 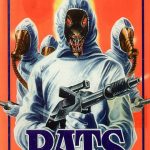 It’s over two hundred years since the nuclear holocaust had occurred (thanks to ‘scientists’, apparently, and not some orange-hued non-politician with a mental age of eleven) and society has divided into two factions: unseen, sophisticated underground dwellers, and ‘primitives’ who still live on the surface, scavenging whatever they can.

Okay, so suspend your disbelief and grant that the ‘primitives’ we’re introduced to look like clean, well-fed early-eighties punk rockers, and that they somehow still have gasoline to ride around on motorbikes and such after over two hundred post-nuke years. Come on, you can do it. There yet? Good. Anyhow, said punkers, as led by Kurt (Ottaviano Dell’Acqua, billed here as “Richard Raymond”), find respite from their constant search for food and shelter when they stumble upon some sort of research centre. There they find both things (although I don’t imagine that even canned 200 year old food would taste as good as they seem to think), but also run afoul of a few thousand mutoid rats, that manage to trap them in the building and chew up the tyres of their bikes. A long night of rodent-based ‘terror’ ensues. 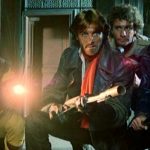 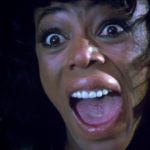 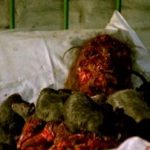 Normally it’d be hard to credit that a bunch of rats lacking the capacity for abstract thought would be so much smarter than humans that they could trap them in a building and kill them off one by one. Not so here, though: this is the most cretinous collection of characters seen since, well, ZOMBIE CREEPING FLESH. Did I mention that there’s a black chick in their number (played by DEMONS star Gerretta Geretta, here “Janna Ryan”) who answers to the name of “Chocolate”? Well, there actually is, and it’s a fair measure of the intelligence and sensitivity that went into the writing of this.

The fact that every man-jack of this gang is a complete and utter bollock-brain doesn’t help the viewer to have a great deal of sympathy for their plight, and nor does the fact that one could easily just trample the crap out of most of the rats, open a door and just walk the hell out of there. At least, you could if it wasn’t for people off-screen throwing handfuls of the poor creatures at you at regular intervals. The dialogue is eye-wateringly atrocious, the acting appalling – and the ending? The ending is the stuff of bad movie legend. In fact, it’s so utterly ludicrous in every conceivable way that one can’t help but love it. Then again, maybe that’s just from sheer relief that what is possibly the longest-seeming 90 minute film in existence has finally come to a close and you can get on with your life. 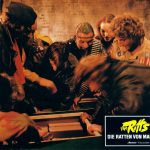 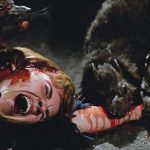 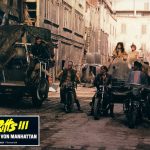 Eagle-eyed Eurocultists will recognise the odd prop from BRONX WARRIORS (1982) and 2019: AFTER THE FALL OF NEW YORK (1983), two ropey but fun Italian post-nuke films that actually come off looking like CITIZEN KANE and SEVEN SAMURAI when compared to this. RATS was in fact released disguised as a second sequel to BRONX WARRIORS when released in Germany, which surely must have prompted the odd audience member to angrily demand their Deutsch Marks back.