Eurohorror of the Week: Phenomena (1985) 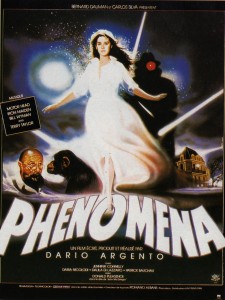 The ninth film by Dario Argento was barely comprehensible when it first appeared in English speaking territories, shorn of around half an hour and going by the name of ‘Creepers’. Granted, it remains utterly bonkers even in its fully restored form, but then again ‘normality’ or ‘common sense’ aren’t generally ‘qualities’ one looks for in the films of Italy’s Master of Horror. Unlike much of his subsequent output, it continues to improve with age.

A very young Jennifer Connelly bags her first starring role as Jennifer Corvino, packed off to a Swiss boarding school while her famous actor father is away on an extended gig in the Philippines.

The cold fish of a headmistress (Dalila Di Lazzaro) and chaperone Frau Brückner (Daria Nicolodi) are quickly getting their knickers in a twist when Jennifer starts sleepwalking, but that’s nothing compared to when they discover that she also has the power to CONTROL INSECTS. 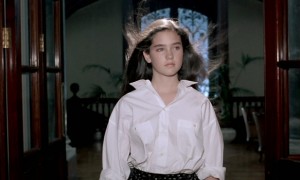 What’s more, a psychopathic killer is prowling the area, and soon has his or her sights set firmly on our adolescent heroine. Can Jennifer and her newfound friends – conveniently local entomologist John McGregor (Donald Pleasance) and his intelligent chimpanzee, Inga – get to the bottom of all this before she’s consigned to the local funny farm?

If you’re not already dying to see this on the strength of that synopsis, then there probably isn’t much I can say to change your mind. It’s every bit as crazy as it sounds, and quite unlike anything on the horror movie landscape of the time. Or any other time, for that matter. We have all the elaborate murder setpieces we expect from Argento, with decapitations, heads smashed through plates of glass in slow motion, razor slashings, and so on, but this is balanced with a fairy tale ambiance created by the beautiful location photography, our schoolgirl heroine and her cute rapport with the insects. Oh yeah, and let’s not forget the chimp. 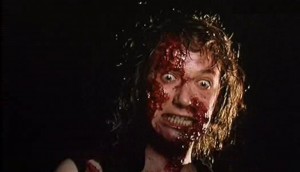 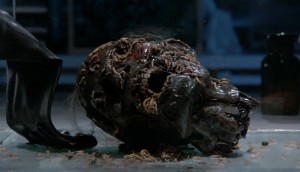 Adding to the surreality of the whole affair is the strange hodgepodge of a soundtrack. For the first time (but not the last) we find Argento employing heavy rock from Iron Maiden and the likes. While there’s certainly nothing wrong with a spot of metal, the effect is invariably rather jarring, distracting from the action and killing the tension. God bless the late Lemmy, but you’ll find yourself involuntarily mouthing the word ‘Why?’ during a dialogue-driven scene with Motörhead’s ‘Locomotive’ meaninglessly grafted onto it. The cuts from Goblin and Simon Boswell complement the goings on far more effectively, but best of all is an unexpected turn from then Rolling Stone Bill Wyman with the magnificent ‘Valley’.

The Frau Brückner character remains telling in regard to Argento’s relationship with Nicolodi at that time. When we first see her in 1975’s Deep Red, she’s autonomous, perky, vivacious, and makes  Argento-cypher David Hemmings look daft at every turn. Ten years on in Phenomena she’s a pasty, uptight nutjob who winds up getting slashed to ribbons by razor-wielding chimpanzee. It’s probably best not to read too much into how Dario’s camera has found a new muse here in the form of 14 year old Connelly. 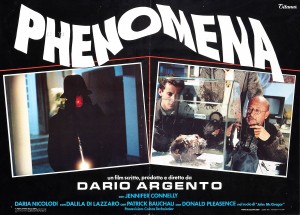 While flawed and in many ways ridiculous, Argento’s film is also defiantly original, representing a real breath of fresh air in comparison to many of today’s cookie-cooker slasher sequels and torture fests. You’ll either love or loathe, but you certainly won’t forget it in a hurry – even if it does mark the point where the director’s Phenomenal run started to go awry.