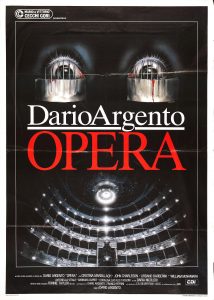 Post-DEMONS and PHENONEMA, Dario Argento set out to create an altogether classier product, as well as put himself back on top as the Don of Giallo. Not that there was much competition for this by 1987. In some ways, he achieved these things: OPERA is one of the most boldly visionary and technically impressive of all his films. The only thing is that it’s also one of his most idiotic, and somehow his most expensive and opulent production to date winds up being one of his trashiest. It was huge hit on Dario’s native soil, but not so much in the UK or the States, where it limped out onto VHS as (groan) TERROR AT THE OPERA.

A gorgeous opening at the film’s Parma Opera House core not only screams quality, but immerses us completely in this rarefied world. Bravura tracking shots, continuous takes, and a raven’s eye view marry up sublimely with the opulent location and chattering, bustling actors – surely, one thinks at this point, setting the stage for Argento’s ultimate masterpiece. Thanks to Argento’s own recent aborted attempt to mount a production of ‘Rigaletto’, we find that the director here, Marco (Ian Charleson), is also a horror film director, already with a production of said Verdi masterpiece under his belt, and now ruffling the feathers of opera purists and critics (and ravens) once more with his gonzo interpretation of the same composer’s ‘Macbeth’.

When a car crash sound effect signifies that Marco’s Lady Macbeth has met with a nasty offscreen accident, her young understudy Betty (Cristina Marsillach) is forced to fill her large shoes. Clearly the obnoxious old diva’s decades of training and experience availed her nought as, you guessed it, plucky young Betty knocks it out of the park first time (in front of a live TV audience to boot) and a star is born. However, fame is ever the double-edged sword, and Betty soon has a deranged fan, first making with the old threatening phone call routine before quickly graduating to bumping off stage hands. Bad enough, you might think, but her life becomes a waking nightmare when the killer initiates a ritual of trussing her up and taping needles under her eyes so that she can’t close them or look away while, in front of her, first her boyfriend Stefano (William McNamara) and then her dresser, Giulia (Coralina Cataldi-Tassoni, of DEMONS 2) are horribly murdered. Will there be any escape for Betty from this maelstrom of bloody terror? 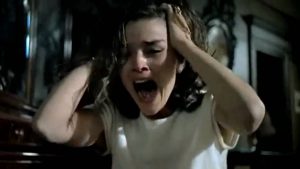 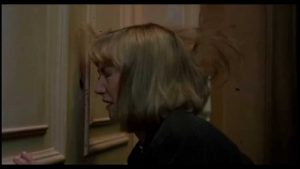 With the Stefano and Giulia murders we have what in many ways can be (and has been) said to the be the ultimate Argento set-piece. Like us, Betty is the captive, helpless viewer when these murders occur, but unlike us, she can’t choose to look away or hit the stop button. And also like us, the act of seeing makes her implicated in what is happening. The killer is doing it for Betty, Argento is doing it for us, because that’s what we want from him. With Giulia’s murder, Bettty is also encased in a glass costume display case, echoing Sam Dalmas (Tony Musante) when he too witnessed a ‘murder’ while trapped behind glass way back in Argento’s debut feature, THE BIRD WITH THE CRYSTAL PLUMAGE. He was compelled to solve that case because he felt implicated by his inability to help the victim, and we enjoyed a similar scenario in DEEP RED.

Now, this all sounds fine on paper, and it is up to this point, but after the first hour things rapidly start to unravel. ‘Common sense’ certainly isn’t at the top of the list of what we look for in an Argento film, for sure, but there does come a point where the whole affair becomes impossible to take seriously. Where the film completely loses the plot is when Marco releases a huge cage full of ravens into the audience, mid-show. Earlier on, the killer had casually despatched a couple of them, and the idea is for them to identify him/her and exact their raven-y revenge. What? Okay, we’ll go with it, I guess. But wait, why has everybody now left the auditorium and Betty alone with the now-identified killer?

Technically, this is an amazing scene, with camerawork that needs to be seen to be believed. But this should have been the new DEEP RED, not another PHENOMENA. So why did Argento include this element? He told Alan Jones: “My major reason for writing [the ravens] into the script was so I could be really inventive with Louma crane and Sky-cam shots.” At least he’s honest. 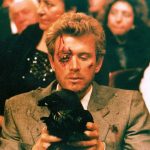 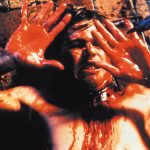 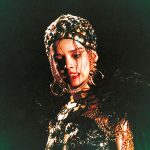 At this point he was still taken with the idea of mixing ill-advised random slabs of heavy metal in with his Simonetti and Boswell, which killed any tension PHENONEMA managed to build up, but contributed nicely to the gleeful throwaway mayhem of DEMONS (which was of course directed by Lamberto Bava, but overseen by him). Here it’s more as in the former; when the butcherin’ starts and it’s time to rock, you don’t know whether to recoil in terror or throw up the sign of the horns and start doing those headbangy-hair-windmill things. Some terrifying cues from one of the composers involved – Brian Eno, no less, Claudio Simonetti, and Bill Wyman – were needed in these scenes, and with talent like that at his disposal it almost beggars belief that this isn’t what happened. It also has the effect of making THAT ravens scene even more silly than it would have been otherwise. He more or less knocked the practice on the head after this, but then again Dani Filth still cropped up on the end titles of MOTHER OF TEARS, twenty years later. 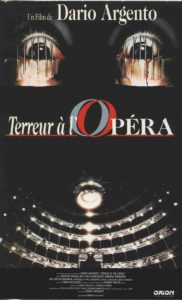 If you think that the ravens scene is dumb, wait until you see the climax. But with all that said, there’s still plenty to enjoy in OPERA, even if a first viewing cannot end in anything other than crushing disappointment. Argento’s camerawork is a joy to behold, as is the fine cinematography from Ronnie Taylor (GHANDI, CRY FREEDOM), and the lavish sets and locations. There’s also, of course, no little appeal in the very fact that it IS ‘dumb’ and ‘bonkers’. Franchises have been built on less. It’s massively flawed, certainly, but even a small Argento collection just wouldn’t be right with a big OPERA-sized hole in the middle of it. Wikipedia says that Cristina Marsillach’s most famous film is 1986 Tom Hanks-starrer, EVERY TIME WE SAY GOODBYE. Bollocks. We all know it’s OPERA.