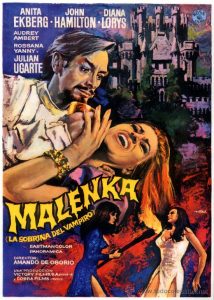 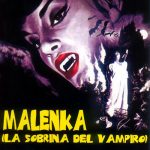 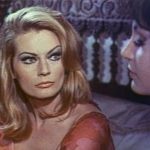 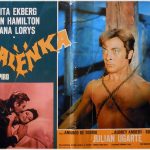 Silvia, played by LA DOLCE VITA legend Anita Ekberg, leaves Rome and her fiancé (Gianni ‘John Hamilton’ Medici) to head for her ancestral castle, where a sizeable inheritance awaits. There she is met by her splendidly coiffured ‘uncle’, Count Walbrooke (Julián Ugarte of FRANKENSTEIN’S BLOODY TERROR and ALL THE COLORS OF THE DARK), who it turns out is a century-old vampire thanks to the occult dabblings of long-dead shared relative Malenka – played in flashbacks by Anita-in-black-wig. Way back when, the old Count was in a relationship with Sylvia’s mother but couldn’t get her to willingly become one of the immortal undead; trying for the next generation he holds her captive. Will fiancé Piero get her letter in time to be able to rescue the virgin Silvia from a ‘fate worse than death’?

It’s kinda tough to take a film seriously when the captive Ekberg displays a range of outrageously glam outfits throughout her captivity and conveniently wakes up one morning with ringlets that it would take a team of Milan hairdressers three hours to achieve. There are dull stretches, not to mention Piero’s woefully unfunny comic relief sidekick to contend with, and it doesn’t help that the versions I’ve seen appear to have been edited with a meat cleaver. However, MALENKA does have a lovely Hammer-via-Paul Naschy atmosphere, and hence is on the whole at least aesthetically pleasing, and proceedings are enlivened by the presence of Diana Lorys as a slinky lesbian vamp. 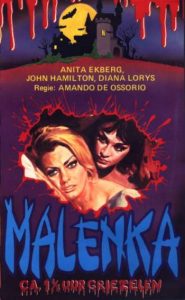 Most of the humour arising from the movie is unintentional, but it’s still a modest pleasure to watch Ossorio’s first attempt in the genre he’d later be loved for. Ossorio himself dismissed it as rubbish, as he did with all of his films. Eurotrash stalwart and Jess Franco regular Paul Muller can be seen in a small role, and look out for Argentine actress Rosanna Yanni of FRANKENSTEIN’S BLOODY TERROR and Franco’s RED LIPS movies, also one of the film’s producers, as a rustic serving wench. 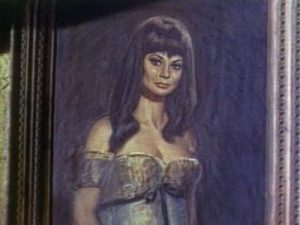