Eurohorror of the Week: The Iguana with the Tongue of Fire (1971)

Although hardly a fan of the genre, director Riccardo Freda can truly be called one of the fathers of the Italian horror movie, helming (initially at least) the first example of the sound era in the form of I vampiri (1957), the gothic Barbara Steele classic The Horrible Dr Hichcock (1962), and its sort-of-sequel The Ghost (1963). Aside from these, though, he distinguished  himself in many a genre, even delivering a hugely successful version of Les Misérables (1948) at one point. By the time we get to L’iguana dalla lingua di fuoco, times have moved on and we find him jumping on The Bird with the Crystal Plumage’s bandwagon; with, sadly, underwhelming  results. 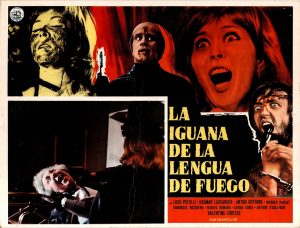 An incredibly convoluted plot kicks off with a pretty nasty murder wherein some poor woman has vitriol thrown at her face prior to having her throat cut. When her body is found in the trunk of Swiss ambassador Anton Diffring’s car, the murder investigation begins, centred around him and his family of oddballs and screw-ups, including satellite functionaries like their chauffeur and doctor. Enter tough guy ex-cop Luigi Pistilli (kicked off the force when a suspect he was beating the crap out of managed take his gun and blow his own brains out), re-employed for this case by the local police commissioner by way of an ‘unorthodox method’. And, soon enough, the vitriol starts to fly in more ways than one and the corpses begin to pile up…

It has to be said that Iguana is for the most part a fairly ugly-looking film, with little of the sumptuousness of Freda’s gothic or historical efforts on display. Freda and cinematographer Silvano Ippoliti (The Great Silence) fail to make the most of the rural Irish setting, causing one to miss the Italianate splendour that can be the saving grace of many a mediocre giallo. But perhaps even worse than this is the fact that, despite there being a murder roughly every ten minutes, the situation fails to generate any suspense whatsoever until we get to the closing act. 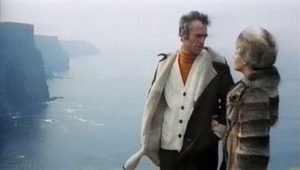 It’s nice to see seasoned character actor Pistilli in a rare leading role, and his performance is easily the most engaging element of the film – discounting the, ahem, finer points of perpetually glammed-up genre regular Dagmar Lassander (as Diffring’s daughter), that is. Doubly so in the English dub, where we have the dubious pleasure of having him post-synched with a phoney Oirish accent, issuing forth such blarney as “Well now, me fleet-footed filly”, “Will ye get me a pint o’ the black stuff”, and, my personal favourite, “the only car you’re gonna see around here is a paddy wagon.”

It’s par for the course for a giallo to have too many minor characters confusing things – so much so that by the time you find out who the perp is you might well have forgotten who exactly they are – but a little more artistry would have gone a long way in helping us suspend our common sense. Amusingly, we see in the first murder that the killer wears sunglasses, hence whenever we clap eyes on said eye-wear, favoured by Diffring and his chaffeur (Renato Romano, Tony Musante’s mate ‘Carlo’ in Bird with the Crystal Plumage), we get a sudden zoom-in and hilarious musical sting. 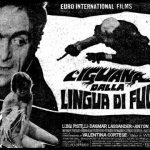 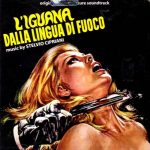 The film isn’t a complete write-off. It has a great cast of Eurocult luminaries, a nice loungecore soundtrack from maestro Stelvio Cipriani, and the last ten minutes are pretty damn intense if you can make it that far. There’s also more than a few laughs to be had, if largely unintentional, and a few cheap jolts, too. But on the whole one gets the feeling that while Argento was the Young Turk in town, reinvigorating his country’s genre cinema like no-one else since Sergio Leone, Freda was by this time the old guard, coasting in a genre he neither liked nor understood. No wonder he hid behind the pseudonym of ‘Willy Pareto’ for this one, as opposed to his usual Anglicised nom de plume of ‘Robert Hampton’. With all that said, however, The Iguana with the Tongue of Fire is just bonkers enough to go down reasonably well after a few pints o’ the black stuff.