Eurohorror of the Week: Don’t Torture a Duckling (1972)

Lucio Fulci’s third and finest foray into giallo territory begins and ends with a lush panoramic shot of the southern Italian countryside. In the opening, this is quickly intruded upon by a winding modern autostrada, followed by a shot of some desperate hands clawing up the remains of what can only be the time-ravaged skeleton of a newborn baby.

As the narrative unfolds, we witness the senseless murders of three young boys in and around the fictional rural village of Accendura, and the inevitable panic and mob rule that grips its citizens. The finger is first pointed at a peeping-tom village idiot, but when the murders continue unabated suspicion falls upon other ‘outsiders’ – chiefly local ‘witch’ Maciara and spoilt city gal Patrizia, hiding out at her uncle’s cool mod pad on the outskirts and appearing to possess a worrying interest in pre-pubescent boys. The fear, ignorance and superstition of the villagers run riot until the killer is revealed to be someone they would never have even dreamed of suspecting. 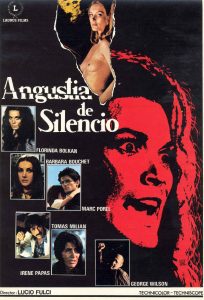 With a title that literally translates as ‘Don’t Torture Donald Duck’ (‘Non si sevizia un paperino’ – ‘Paperino’ being the Italian name of everyone’s favourite aquatic curmudgeon), Fulci’s film can almost be seen as the antithesis of the generic giallo, a genre in full swing by now, over two years since the release of THE BIRD WITH THE CRYSTAL PLUMAGE. The usual city-break/jet-setting milieu is eschewed in favour of the rural, and the murder victims are small boys as opposed to the usual assembly of mind-bendingly sexy Eurosirens. In fact, the only sexualised female figure in the film is Patrizia (genre mainstay Barbara Bouchet), who as a character is problematized from her very first appearance, seen as she is teasing a minor (who will soon become the third murder victim) with her naked body, in a scene calculated precisely to have audiences squirming uncomfortably in their seats. Bouchet’s character spends most of the movie as one of the prime suspects, always seeming to be in the right place at the wrong time (thanks mainly to some very clever editing).

Only Tomás Milián, who’d previously worked with Fulci on 69’s BEATRICE CENCI, provides a character we can identify with, and this he does admirably, although under-used, in the role of Martelli, a worldly-wise hotshot reporter from Rome who initially is just there for the scoop, but becomes increasingly drawn in emotionally as the film progresses. Another returning Fulci collaborator is Florinda Bolkan, a far cry from her more elegantly turned-out characters in Elio Petri’s INVESTIGATION OF A CITIZEN ABOVE SUSPICION and Fulci’s own LIZARD IN A WOMAN’S SKIN as the ragged, cave-dwelling, intellectually stunted ‘witch’ Maciara, who becomes the focal point of the villagers’ desperate need for vengeance. 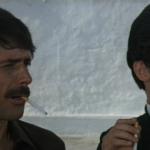 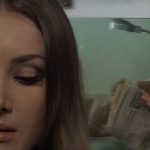 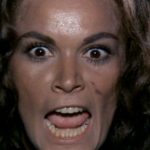 Our sympathy for this character is also played with. It emerges that she isn’t responsible for strangling the three boys, but earlier, after catching the selfsame lads disturbing the shallow grave of her dead baby son (who she believes to have been a ‘child of the devil’), she is seen to wish death upon them, poking needles into voodoo dolls in a supposed black magic ritual taught to her by her magus father. She herself believes she is guilty of the murders until she discovers the actual circumstances of the deaths.

That she is released the very morning following her arrest does nothing to dissuade the villagers of her guilt, and, in a melodramatic but shockingly violent and extremely effective scene, she is beaten within an inch of her life by some of their number, before agonisingly dragging herself up to the freeway to die in a sequence echoing the tragic climax of Fellini’s IL BIDONE. ‘We can build motorways,’ laments the police chief in the subtitled version, ‘but we can’t overcome ignorance and superstition.’ Needless to say, Maciara has well and truly secured our sympathies by this point, not to mention Martelli’s, but even when the murders begin anew the villagers show no signs of remorse. Thanks to her father’s twisted mindset, she is as much a victim of child abuse as the murdered boys.

What we’re not made party to is the reaction of the villagers to the revelation that the crimes have in fact been perpetrated by someone at the very core of their community rather than at the margins; soccer-playing priest Don Alberto (the late Marc Porel). In early appearances, the youthful Don Alberto resembles nothing so much as a saint, flanked in one telling shot by his young ‘disciples’ like a figure in a religious painting. His concern for the immortal souls of the villagers extends even to controlling the kinds of periodicals they can obtain from the local newsstand. 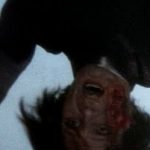 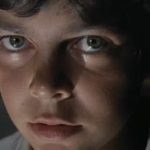 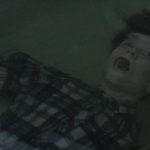 Fulci and screenwriter Roberto Gianviti’s attack on the hypocrisy of the Catholic Church greatly angered agents of what was then and is now a dominant force in Italy, with the consequence of the film receiving very limited distribution, despite some critical success. However, this wouldn’t deter subsequent giallo-auteurs from following in their footsteps with numerous homicidal priests of their own. 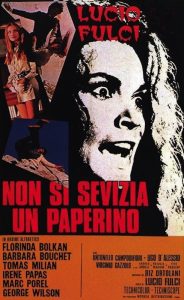 The film is full of masterful flourishes from Fulci; the sound of a dog barking in the night time scene where Bruno is murdered seguing into the sound of the police dogs barking as their masters comb the area for the boy’s body the next day; the indelible, heart-rending image of a small mentally-deficient girl (Don Alberto’s sister) playing with a headless doll. Little of the misogyny that the director would later be controversial for is on display and one feels as though the Fulci working here would have shaken his head gravely at such short-sightedness.

Crisp cinematography from Sergio D’Offizi and a sparse but effective score by Riz Ortolani (both would later lend their considerable talents to CANNIBAL HOLOCAUST) add to an overall impression of quality, and all of the main actors, adult and child alike, acquit themselves admirably in what is arguably Fulci’s most accomplished film.