Eurohorror of the Week: The Devil’s Possessed (1974)

Although made and released in the correct timeframe to be another EXORCIST-filchin’ affair, this lurid American retitling actually hides a Spanish historical caper called EL MARISCAL DEL INFIERNO (‘The Marshall of Hell’), with homegrown horror legend Paul Naschy present and correct as the titular malefic marshall. It’s directed by frequent Naschy collaborator León Klimovsky, who lent his considerable skills to many of the most memorable Hispanic Horrors of the period, not least being Naschy’s breakthrough WEREWOLF SHADOW (1971). 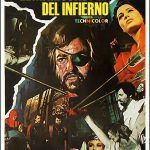 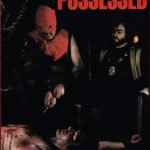 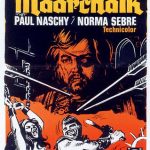 Written by Naschy himself (under his real name of Jacinto Molina Alvarez), this tale finds the Spanish Lon Chaney in the role of the despicable Barón Gilles de Lancré, who seems to be a sort of mash-up of Macbeth and Gilles ‘Bluebeard’ de Rais. Returning from war with the English only to be snubbed at court by his king (offscreen), he sets about more esoteric pursuits; chiefly the search for the Philosopher’s Stone, which as every Harry Potter fan knows is not a stone at all but the process of turning base metals into gold and producing the elixir of life. To this end, the services of shady alchemist Simone de Braqueville (Naschy-veteran Eduardo Calvo) are secured.

Gilles may start out with fairly good intentions, but with the Lady Georgelle (Norma Sebre) and Braqueville conspiring together to pour poison into his ears it’s not long before he’s presiding over  a reign of terror, sending his violent and ruthless men out to enforce his law. Which includes kidnapping young virgins to be sacrificed in psychedelic Satanic rituals. Enter the noble Gaston de Malebranche (Guillermo Bredeston), a war buddy of Gilles’ returning after years away, who’s understandably more than a little weirded out to find out what his old pal has been getting up to. As Gilles becomes increasingly power-mad, it falls to Gaston to whip up the huddled masses into open revolt. But can they be any match for… the Marshall of Hell? 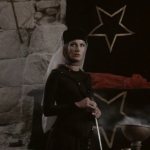 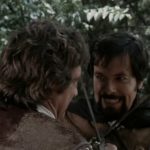 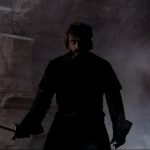 Fans looking for demonic possession thrills or MARK OF THE DEVIL-style torture scenes will be disappointed when they find that this one has more in common with a Sunday afternoon Robin Hood flick. The few torture scenes are tame and there’s none of the nudity and sleaze than one tends to associate with seventies Spanish horror. But there’s still much to enjoy. The use of real, not to mention rather impressive, castles belies the low budget, and the various swordfights and tussles are well staged as far as these things go.

Naschy is a pleasure to watch in a villainous role recalling HORROR RISES FROM THE TOMB (1973), and Sebre is fantastic as the evil Georgelle. Her stunning feline looks bring to mind such leading Eurocult femme fatales as Rosalba Neri and Helga Liné, making it all the more a mystery why she wasn’t offered more roles in the then-flourishing Spanish horror scene. You can certainly understand how she’s managed to get Gilles under her thumb, with or without the benefit of Black Magic. Bredeston, while a decent enough actor, is of course far less interesting to watch than our villains.

One memorable scene finds Gilles taunted by the imagined screams of the women and children he’s had put to death, while a fisheye lens veers wildly around the room. It must be said that the script takes a long time fully make up its mind whether he’s gone fully over to the dark side or not. At times like this he seems remorseful, and soon declares his intention to join an order of monks to do penance with. However, when one of said monks unsurprisingly condemns him, he has the whole lot of them slaughtered in one fell swoop. Much of the fun comes from anticipating his inevitable sticky end, and the film doesn’t disappoint on that score. 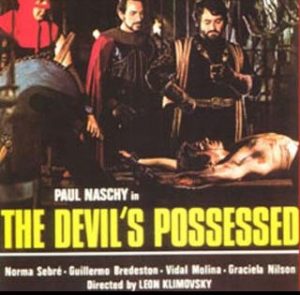 The soundtrack is a weird mix of swashbuckling library music from the CAM archives and strange electronic cues by composer Carlos Viziello. The latter give a sublimely odd ambience to the main Satanic ritual scene, which wouldn’t be out of place in any of Nachy’s better-known movies. While casual horror fans will undoubtedly find THE DEVIL’S POSSESSED something of a bore, Eurohorror devotees and nostalgia buffs will take no small amount of pleasure in a Sunday matinee style movie with Black Magic, torture, an awesome evil Eurosiren, and, well, Paul Naschy thrown into the mix. Well, I did, anyway.