The term ‘demented slice of Eurosleaze’ has been a much overused one in cult film writing circles for at least as long as there’s been an internet, but boy does it fit perfectly when it comes to Renato Polselli’s DELIRIO CALDO (‘Hot Frenzy’). 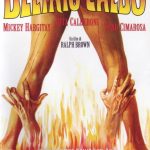 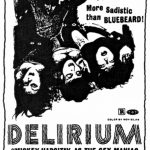 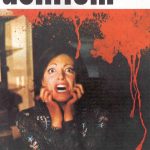 We’re in England (supposedly), and Dr. Herbert Lyutak (Hargitay) is having fun at the local police’s expense being on the one hand their psychological consultant and on the other the serial killer that they’ve been hunting for months. His devoted wife Marcia (Calderoni) strongly suspects this is the case, but loves him no less for it. However, just as Herbert’s conscience starts to plague him and he lets slip his strategy for self-sabotage to Marcia, it seems that someone else is getting in on the murderous action, providing him with handy alibis and covering his tracks. Even early on in the narrative, it’s hardly a brain-strain to work out who this is.

Our Marcia has problems of her own, most of them to do with Herbert. Apart from the risk of being jailed as an accomplice, the fact that the guy is impotent and can only get his jollies by inflicting pain on her or killing young girls weighs hard, and her fevered dreams reveal her own repressed sexual desires. Meanwhile, the police (all three of them) waste an inordinate amount of time in pursuit of their one rubbish suspect, portly car park attendant Lacey (Tano Cimarosa), who leads them a merry dance in the name of depressingly unfunny comic relief. As we lurch toward an insane final act, the net closes in on Marci – sorry, I mean the mysterious second killer, leading to a right old Hot Frenzy at chez Lyutak.

Although fairly muted for the first two thirds of the movie, Calderoni really shines in these final scenes. It’s no mean feat to steal the limelight from the wildly overacting Hargitay, but her complete breakdown here is nothing short of mesmerising. As for Hargitay himself, it’s another wild-eyed, twitchy, and deranged performance from the former Jayne Mansfield beau. It’s hard to imagine how anyone could act more suspiciously than Herbert when attempting such an ambitious double-bluff with the police, especially when he’s down at their headquarters (represented by one room, probably in someone’s house), in the belly of the beast, as it were. Lyutak couldn’t be more suspicious if he had a hoodie on with ‘I am the serial killer and I’m laughing at you’ emblazoned on it. The ultimate ‘Hargitay Moment’ comes in one of the dream sequences, where his wife, niece and housemaid cavort in wild lesbian abandon, while he, in chains, strains at the leash like a rabid animal.

However, even this almost seems restrained next to his berserk turn as ‘The Crimson Executioner’ in BLOODY PIT OF HORROR. Certainly a better bodybuilder than he was an actor, Hargitay threw himself into roles like this with a gusto like few others, making Jack Palance appear a master of understated menace in comparison. Hargitay and Calderoni would be re-teamed by Polselli in REINCARNATION OF ISABEL; Hargitay would throw in the acting towel after that, but Calderoni would stay in film work throughout the seventies, including another female lead in Luigi Batzella’s NUDE FOR SATAN (1974), which makes for an equally batshit-crazy companion piece to these two infamous Polselli affairs. She retired from acting in 1983.

Anyway, back to DELIRIUM, and proceedings are further enlivened by the presence of young Crista Barrymore in the role of Marcia’s niece, Joaquine, who has an unhealthy obsession (you don’t even have to ask what kind) with her aunt that has bloody consequences in the final reel. There’s also no small amount of unintentional hilarity to be had at the sheer stupidity of the police inspector, Edwards (as played by Italian singing star Raoul), and his men, who can’t seem to detect the sheer obviousness of the fact that Lyutak is the deranged lunatic and murderer of young girls that they’re looking for. In this way the film almost plays like an impoverished, kinky-sex-obsessed version of Elio Petri’s INVESTIGATION OF A CITIZEN ABOVE SUSPICION. Added to all this, we have composer Gianfranco Reverberi in full Ash Ra Tempel mode, with bongo drums, screeching guitars and full-on psych wig-outs dominating the soundscape whenever something exciting happens. 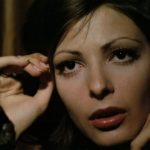 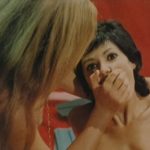 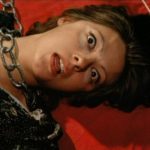 There are two different cuts of DELIRIUM, and both can be found on Blue Underground’s still definitive and still widely available 2008 DVD. The longer European cut is the superior of the two, but the American version is not without some interest. Stock Vietnam footage, along with a few new shots featuring Hargitay and Calderoni, are added, making Herbert now into a psychologically scarred ‘Nam vet, and Calderoni a field nurse who falls in love with him at first sight. This doesn’t really add anything at all, but is interesting nonetheless, and we also find ourselves back in ‘Nam at the end for an unconvincing extra final twist. Surprisingly for a shorter export version, we also have two extra murder scenes, one of which completely changing the motivation of Joaquine’s bloody vengeance. Both are shocking and memorable. However, the Vietnam sequences are clumsily shoehorned in, and both the absence of them and the different, slightly more nuanced (I said slightly!) emphases of the Euro cut make the latter feel much more definitive and satisfying.

Yep, DELIRIUM is without a doubt ‘Eurosleaze’, a ‘slice of’, and completely ‘demented’, but many ‘better’ filmmakers have made far less memorable films with decent scripts and on much more lugubrious budgets. The sheer insanity and unique aesthetic of these films from the late Polselli make them things to treasure for devotees of the darkly outré, racy, and obscure.