Better known in the US and UK as ZOMBIE 4: AFTER DEATH and ZOMBIE FLESH EATERS 3 respectively, this tawdry effort from Claudio (TROLL 2) Fragasso doesn’t even deserve to live on the same shelf as Lucio Fulci’s ’79 classic, whatever you feel like calling it. Can OLTRE LA MORTE be any worse than that Fulci / Bruno Mattei, Fragasso-scripted fiasco ZOMBI 3 / ZOMBIE FLESH EATERS 2 of the same year? Why, yes sir. Yes it can. 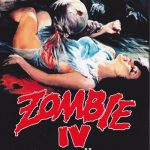 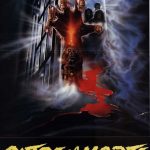 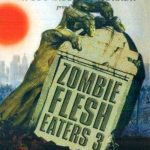 In a garbled and mostly irrelevant narrated introduction, we learn that a bunch of scientists have set up camp on an obscure jungle island, researching a cure for cancer. Or something. In doing so they provoke the ire of the local voodoo priest, and when he’s filled fulla lead by one of their number he ushers forth a curse that sees a plague of zombies wipe them out instantly. The only survivor is a young child named Jenny. Twenty years later (although everyone still looks very late-eighties to me), the adult Jenny (Candice Daly) accidentally finds herself back at the remote, extremely hard-to-find island, travelling in a tiny motorboat, for reasons unexplained, with a small group of grizzled but decidedly out-of-shape soldiers of fortune.

When one of this trio foolishly reads from the ‘Book of Death’, found in the late voodoo priest’s underground temple, the undead suddenly start to rise from their graves – or, more accurately, up out of the leaves and grass they had covering them. All this despite the fact that we’ve just had it spelled out for us that the island is already infested with zombies. If you’ve seen just about any other zombie movie ever, you can guess the rest. 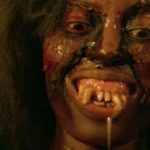 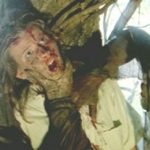 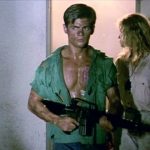 To make up for receiving no on-screen credit for her work on ZOMBI 3, screenwriter Rosella Drudi is given full credit for this one, despite it being co-written by her husband, Fragasso. Bet she’s over the moon about that. The acting and dialogue are uniformly dreadful, and Franco Di Girolamo’s flat TV movie cinematography makes the film look even cheaper than it actually is.

Clearly trying to summon the spirit (or rather, cash influx) of recent hits DEMONS and RETURN OF THE LIVING DEAD (both 1985), Fragasso brings deadites of the fast-moving variety. Well, at least when he remembers to. They’re quite literally jumping out all over the place in their crummy make-up, as well as performing exaggerated leaps backwards whenever one of our heroes deals them a feeble-looking blow.

ZOMBI 3 remains irritating because it can’t even get its own undead lore straight, and things are even worse here. Some of them run and jump, others just shamble Romero-style, and some can even talk. The talking ones seem to be solely the reanimated corpses of our white explorers, rather than the supposedly Afro-Caribbean ‘natives’ (the extras were mostly Filipino) that make up the vast majority. Make what you will of that one. You’ll probably be right. 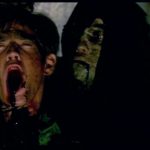 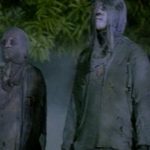 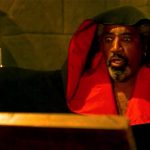 Although adding to the general hilarity, matters aren’t helped by the film’s grating late-eighties synth and soft rock (“I’m living after deeeaath!”) score from one Al Festa, who’d go on to direct the possibly even more terrible ‘giallo nuovo’ that is FATAL FRAMES (1996). Not only were electronic soundtracks fashionable at the time, but the Italian genre film factory was also on its knees, so we can’t be too surprised that they passed over Bruno Nicolai with a big orchestra in favour of one guy piddling around on a Yamaha keyboard. Like most electronic scores of this period, it serves mainly to remind one just how good John Carpenter is.

Fake Fulci connection notwithstanding, the only reason that AFTER DEATH hasn’t faded completely into the mists of crap film history is – you guessed it – the copious amount of blood n’ guts on display. Although for the most part poorly executed, the various throat- 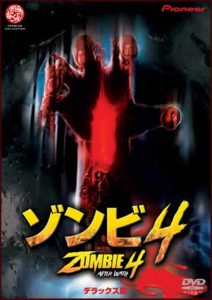 rippings and faces torn off, etc, make it an nigh-irresistible must-see for any Italian splatter completist. Once all the good ones have been done, anyway. An infamous bravura gore sequence at the film’s climax, where a zombie hand comes bursting through someone’s torso for a spot of ‘human puppetry’, may well look fake, but still remains absolutely F***ING HORRIBLE. So, while a solid one in every other aspect imaginable, the film at least gets ten out of ten for pure gore enthusiasm.

While watching AFTER DEATH alone and stone cold sober may well make you consider eschewing horror fandom altogether in favour of basket-weaving or line-dancing, the simple addition of alcohol, pizza, and a friend or two is guaranteed to make for a far more entertaining prospect. And, no matter how wankered you may subsequently become, you can remain safe in the knowledge that you’re still probably more coherent than the plot or any of the characters at any given moment in the film.