Eurohorror of the Week: The College Girl Murders (1967)

A precursor to Italy’s giallo cycle, the ‘krimi’ was a genre of German murder/crime mysteries based on (or at least pretending to be based on) the work of Edgar Wallace, Britain’s most prolific thriller novelist of the 1920s. Starting in the late fifties with THE FELLOWSHIP OF THE FROG (1959), the krimi would remain popular domestically and around Europe through to the early seventies, where it was finally absorbed into the giallo form with Italo-German co-productions like SEVEN BLOODSTAINED ORCHIDS and WHAT HAVE YOU DONE TO SOLANGE? (both 1972). 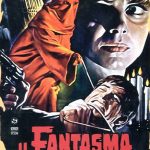 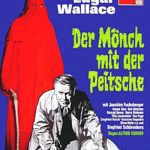 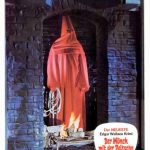 By 1967, chief exponents Rialto Film were exploding into colour and spicing things up with glamour gals and swingin’ jazz-pop scores, not to mention bringing in a host of stray elements from other genres; to the point where one questions just how ‘Edgar Wallace’ these films actually are. Churlish to moan about such things, though, when DER MÖNCH MIT DER PEITSCHE (‘The Monk with the Whip’, US: THE COLLEGE GIRL MURDERS) is so much goofy fun.

What must surely be one of the most convoluted plots in film history starts with your textbook mad scientist in a horror film lab, celebrating the perfection of his new poison gas by testing it out on his wavering assistant. Now, all this is going to take too long to explain properly, but essentially said scientist is murdered by a red-KKK-hooded, whip-wielding monk, and his gas-spraying device is hidden in a bible so that another mysterious villain can break a guy (Siegfried Rauch of CONTAMINATION) out of jail and send him to plant said bible where it’ll hopefully be picked up in morning worship by one specific girl at the nearby girls’ boarding school. Amazingly, this works and the girl is killed, and our prison escapee, Frank, is sneaked back into jail again. Got all that? You sure? Good, because that’s not even the first ten minutes covered. 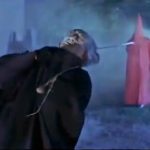 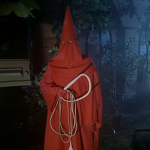 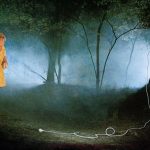 Anyway, enter Inspektor Higgins (recurring krimi leading man Joachim Fuchsberger) and Sir John (Siegfried Schürenberg, another regular, often in the same role) of Scotland Yard, who aren’t going anywhere until this whole business is sorted out. The murders continue, with Frank upgrading to a sci-fi gas-gun before being offed in favour of his cellmate, and the whippy Monk still prowls the school hallways at night. Suspicion falls on a couple of lecherous lecturers. We see much of the villain’s chief minion, Greaves (Günter Meisner, who you may recognise from 1971’s WILLY WONKA & THE CHOCOLATE FACTORY), but just who is the evil mastermind of this ridiculously over-elaborate scheme – and what on earth are they doing it for?

It’s a scheme that Edgar Wallace didn’t mastermind, that’s for sure, but rather Rialto screenwriter Herbert Reineker, extremely prolific in the sixties under the name of ‘Alex Berg’. Director Alfred Vohrer was also an old hand at the krimi game by this time, a key player at Rialto that delivered such hits for the studio as DEAD EYES OF LONDON (1961). Here he’s working with a particularly silly script from his frequent collaborator, but keeps things moving along with enough humour and panache for us to forgive its absurdities.

The film feels particularly zany and schizophrenic thanks to its rogue elements from other genres. There’s the horror vibe with the mad professor’s lab and the Monk stalking the Gothic school grounds, but also a whole spy-film sub-narrative around the mysterious unseen super-villain, whose impressive lair includes sliding doors and a pit of crocodiles. What’s more, the central matter of the police’s investigation is played mostly for laughs, with upper-class-nitwit Sir John talking down to everyone about how all crimes can be solved through the application of psychology, while constantly getting everything completely wrong. The less said about his comedy secretary (Ilse Pagé) the better. Only in the sixties! 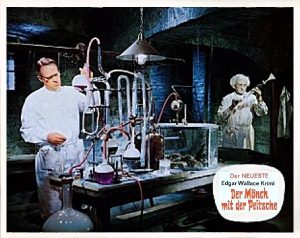 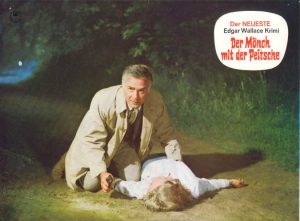 Certainly not the film for you if looking for some proto-slasher type action, but a choice cut of sixties B-movie madness for any other occasion.