Eurohorror of the Week: Bloody Pit of Horror (1965)

It’s safe to say that BLOODY PIT OF HORROR (‘Il boia scarlatto’) is a markedly different kettle of piranhas from Massimo Pupillo’s other 1965 entry, TERROR-CREATURES FROM THE GRAVE.

This time we’re smack in the swingin’ present day and in full gaudy colour. 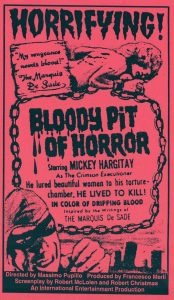 One can only assume that actors Walter Brandi and Alfredo Rizzo were good friends with Pupillo and/or producer Ralph Zucker – or maybe holding their families hostage – because here they are again, this time as a horror writer and his publisher scouting for locations for a cheesecake cover photo shoot with their bevy of glamour gals. To this end, they arrive at the castle of actor-turned-recluse Travis Anderson (Mickey Hargitay), who only agrees to let them stay when he sees that Rizzo’s PA is Edith (Luisa Baratto), an old flame.

All good then, eh? Nope, because unfortunately for our merry little troupe Travis believes himself to be the reincarnation of the castle’s previous owner; medieval torturer the Crimson Executioner, who was himself put to death for being more than a touch overzealous and taking his work home with him, as it were. And before you can say ‘WTF?’, he spectacularly loses the plot and dons the Executioner’s garb (supervillain costume would be more accurate) to gleefully set out on a wacky torture and killing spree. 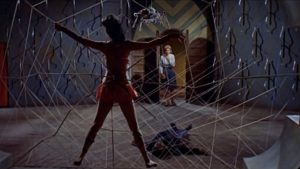 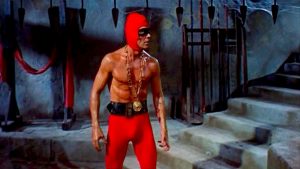 BLOODY PIT isn’t just ‘bad’ – it’s one of the most riotously enjoyable bad films there is. This is trash of cosmic proportions. This is cheese so delicious that a restaurant would get Michelin stars just for having it on the menu. The acute sense of ineptitude in every aspect of the production just beggars belief. And Hargitay! No lack of acting ability serves as a barrier to the wild abandon with which he throws himself into the role of the Executioner. This was clearly the moment that the former Mr Universe had been waiting for his whole life. ‘Manic’ doesn’t even begin to cover it. ‘Utterly deranged’ doesn’t either. Contrast this with Brandi and Rizzo, sleepwalking their ways through another work day, all but checking their watches to see if it’s lunchtime yet. 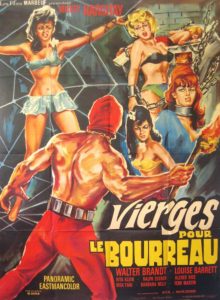 Added to this lunacy, we get Travis’s out of shape henchmen, that look as though they’re out on loan from the sixties BATMAN show, and an incredibly poor mechanical spider employed in one of the most contrived torture traps in history. And what the hell’s going on with the music in that interminable photo shoot scene? The craziest thing is that Pupillo thought this unintentional laff-riot worthy of his usual Americanised pseudonym of ‘Max Hunter’, when he’d all but washed his hands of the eerily effective TERROR-CREATURES. The mind boggles – as will yours when you step into the BLOODY PIT OF HORROR!