This late entry in the giallo stakes from Lamberto Bava (in between Macabre and Blastfighter) was originally intended as a four part TV mini series before being deemed too violent by the network and truncated into a feature film. While you might see worse these days on the average episode of Game of Thrones or Banshee, in 1983 they probably had a point. The screenplay – well, teleplay at least – came from Italian genre legends Elisa Briganti and Dardano Sachetti, fresh from Bronx Warriors. 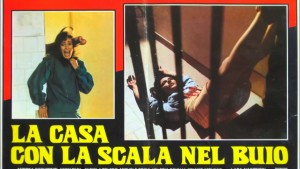 Andrea Occhipinti (from Fulci’s New York Ripper) is Bruno, a composer working on a horror movie score at a spacious but sparse mod villa owned by the studio. Before long pretty girls start popping out of the woodwork (quite literally in the case of first one, found in a closet) only to get horribly murdered by a knife-weilding nutbag prowling the premises. Could the answer to the mystery lie in the whispering female voice that’s been inadvertently recorded along with his music? 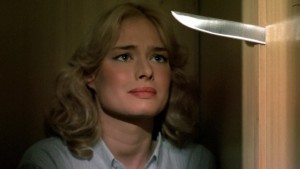 The first half of ‘La casa con la scala nel buio’ is woefully stiff and stilted, with a hell of a lot of time spent with Bruno searching the house. This feels more like padding than genuine atmosphere-building most of the time, especially when it turns out to be in aid of a false scare. The clumsily handled first murder plays like a low rent Argento homage.

However, with the second murder scene– 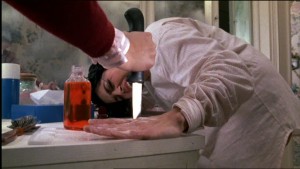 which might just be one of the most arresting and disturbing in the whole giallo canon – the film suddenly seems to find its feet and gain some  momentum, and while what follows might not make a great deal of sense you’ll have fun getting to the wonderfully trashy denouement. So, yeah, a bit like almost any given Italian horror film in that respect.

On the whole, A Blade in the Dark does come across as ‘Argento on the cheap’ (although Hitchcock is another obvious influence) but it’s 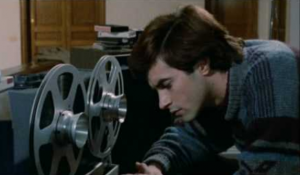 not too bad a prospect for fans of the giallo genre. The De Angelis brothers’ tinkly score (predominately the theme that Bruno is supposed to be composing for the fictional film) grates a bit, the English dub is dreadful, and one can’t even imagine how much inane padding the proposed mini-series would have had, but we’re used to overlooking such things by now aren’t we? Bava actually pulled off some solid work on a tiny budget here.

Look out for Michele Soavi as you’ve never seen him before, Macabre’s Stanko Molnar and young Giovanni Frezza, the infamous ‘Bob’ from House by the Cemetery.