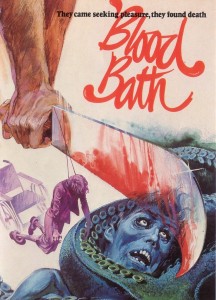 While Mario Bava’s Blood and Black Lace (1964) wasn’t the first giallo, it certainly set the template for subsequent work by Dario Argento and countless others throughout the late sixties and the seventies. A template that Bava would gleefully rip up and throw over his shoulder with this 1971 offering. Originally entitled Reazione a catena (‘Chain Reaction’), A Bay of Blood was unlike anything that had come before.

One dark night, an elderly heiress is attacked in her home and hung by the neck until dead. So far, so giallo. However, as the murderer stands to gloat over his handiwork, he too is quickly wiped out by a second assailant. Thus is initiated the ‘chain reaction’, and bodies start dropping left right and centre as any possible heir or obstruction to ownership of the Bay is brutally offed by an unknown killer. Or killers. Because it soon becomes clear that pretty much everyone in the locality is prepared to spill some of the red stuff in pursuit of those deeds… 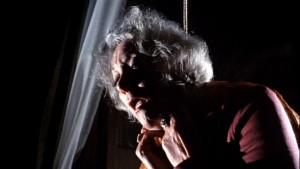 Bava’s film really pushed the envelope in terms of splatter quotient for the time, but there’s also the fact that there are no heroes here, no-one to root for (at least for more than a few minutes), that makes A Bay of Blood such a unique experience, and a shocking one for audiences of the day. Legend has it that none other than Christopher Lee, star of Bava’s The Whip and the Body (1963), thundered his way out of a screening in reaction to its bloody excesses. 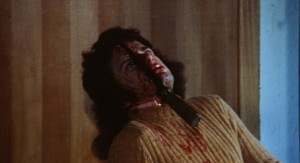 But beyond all this it’s a masterclass in pure filmmaking, compelling even without a sympathetic lead character to invest in. All we have are conniving estate agent Ventura (Chris Avram), a bunch of local oddballs and a quartet of fun lovin’ teenagers, who all get hacked up, impaled or decapitated before long, but a combination of great actors, Bava’s roaming camera, and a nifty bongo-driven loungecore score from Stelvio Cipriani keep us plugged into this nihilistic world. 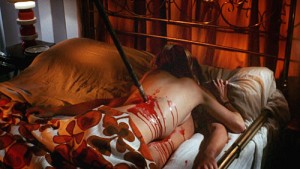 Whatever the case, the film was re-issued by distributors on the US grindhouse circuit to various degrees of success under the names of Carnage, Twitch of the Death Nerve (my favourite) and even The Last House on the Left Part II, which is ironic given the Sean Cunningham connection just mentioned. The film became Blood Bath on UK VHS, and was banned under that title when the Video Recordings Act came into force. While this might seem ludicrous today… actually, yeah, it was ludicrous then, too. Bava’s film is an off-the-wall classic that should be tracked down by any devotee of sanguinary cinema. Or just plain good cinema.