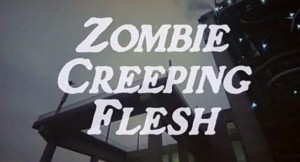 Hey, I don’t remember saying that these were all going to be good.

Better known to American genre and bad film buffs as Hell of the Living Dead, this is the work of the dreaded Bruno Mattei, infamous for, well, this, and the equally risible Rats: Night of Terror (1984). And, as usual, it was with a little help from his pal Claudio Fragasso – the man responsible for bringing Troll 2 (1990) into the world. However, mind-bendingly awful as the film may be, it still isn’t one for the lily-livered or faint of heart.

When a chemical leak at a top secret scientific installation in Papua New Guinea kicks off an unstoppable zombie contagion, a SWAT team with the combined mental age of 12 is despatched into the jungle to investigate. An odd tactic, one would think, as not only is New Guinea slightly out of the jurisdiction of the police force in question, but also because parachuting them straight into the area where the lab actually is would surely be more efficient. But hey, they’re only a SWAT team so they can be dressed like Ken Foree and Scott Reineger in Dawn of the Dead anyway. And even if SWAT teams ever were sent on missions to New Guinea, which they aren’t, there’d be no sense whatsoever in their wearing urban camouflage in the damn jungle. But I digress. 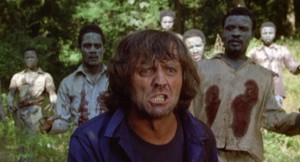 There they hook up with incredibly irritating leading lady Margit Evelyn Newton and are forced to hack and shoot their way across miles of undead-infested jungle terrain to get to the labs, as the infection meanwhile rapidly spreads itself across the world.

This is pretty much the entirety of what passes for a plot here, but let’s not write it off just for that, eh? There are all kinds of other considerations. Like the fact that the dialogue is so mind-numbingly moronic and obvious that you feel like grabbing the characters by their hair and slapping them repeatedly. Like the fact that the film is around 20% mismatched re-used footage from Barbet Schroeder’s 1972 film La Vallée and a bunch of nature documentaries, making it feel as though it were edited by the razor-weilding chimpanzee from Phenomena. Like the fact that none of it makes a jot of sense at any given point.

Let’s face it, there are only two reasons why anybody would still want to watch Zombie Creeping Flesh. It’s incredibly, nastily gory and – to use a phrase I usually avoid – it’s ‘so-bad-it’s-good’. The ensuing laff-riot coupled with copious flesh-ripping make it a prime example of the ‘beer and mates’ movie, as inebriation and distracting chatter are the only things that could possibly serve to make it enjoyable. Okay, there is a third reason – you might be sad sack like me who’s made it his mission in life to view every Eurohorror in existence. 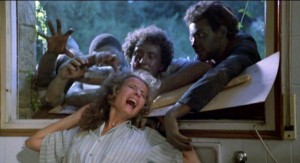 On the plus side, we do have ‘music by Goblin’, but even that’s a cheat. In place of an original soundtrack, the film heavily employs recycled cues from the band’s scores for Dawn of the Dead, Contamination and Beyond the Darkness. Meaning that we have our heroes running around in their Dawn of the Dead costumes shooting zombies to Dawn of the Dead music. It’s okay, George, chill out; imitation is the sincerest form of flattery, yes?

If this all sounds like fun to you, then by all means dive in there. It was a free country last time I checked. But don’t say I didn’t warn you.