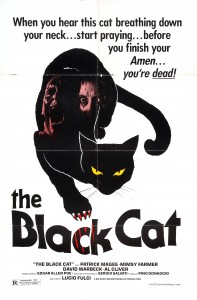 This classic-era Lucio Fulci opus is only related to Poe’s classic tale by virtue of featuring a man in an antagonistic relationship with a sinister black feline, and said guy walling up a woman in his cellar only for the cat to… damn. Think I just gave the ending away right at the top of the column, but that’s okay, there’s a bit more to it than that.

Coming smack in between City of the Living Dead (1980) and The Beyond (also ’81), The Black Cat tends to be unfairly vilified for the terrible crime of not being the sort of balls-to-the-wall gore-fest that characterised the Maestro of Mayhem’s output of the period. Although produced at the height of the Italian splatter boom it owes more to the classic style of Hammer and the likes, which is probably why none other than Peter Cushing was approached to play the lead role. Ironically, the Gentleman of Horror turned it down when made aware of Fulci’s chunk-blowing reputation. Oh well, they probably wouldn’t have got on anyway.

Instead, we have another Hammer veteran in the form of Patrick (Demons of the Mind) Magee in his final film role as psychic Professor Robert Miles, living alone in his dusty old manor house with the titular gatto nero. As a string of strange and seemingly accidental deaths plague the nearby village, it doesn’t take American tourist Jill (Mimsy Farmer) and investigating Scotland Yard Inspector Gorley (David Warbeck) long to find that these are linked to Miles and his malefic moggy, and that all the victims are folk who have crossed or inconvenienced the grumpy old sod in some way. The cat is the culprit, of course; but is it Miles or our four-legged friend calling the shots?

Fulci’s trusted cinematographer Sergio Salvati provides some stunning scope work, his ‘cat-cam’ prowling around the village and Miles’ house like a co-conspirator, and Vincenzo Tomassi’s editing is as tight and disorientating as it is on the more popular living dead epics. The film also boasts a beautiful score by Pino Donaggio (Don’t Look Now). It’s a pity he never worked on a Fulci film again but even more so that the score isn’t available anywhere, on any format. Admittedly the movie does drag at times, but that feeling of Fulci dread is at least present and correct. 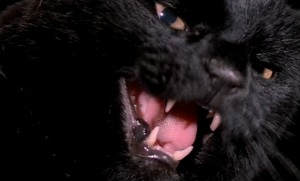 Actress Mimsy Farmer came to the public’s attention with her starring role in Barbet Schroeder’s Pink Floyd-soundtracked 1969 film More, but is better known to Italian horror buffs for her roles in Argento’s Four Flies on Grey Velvet (1971) and Francesco Barilli’s The Perfume of the Lady in Black (1974). Warbeck, previously in Hammer’s Twins of Evil (1971), would go on to star in Fulci’s next film and become a horror icon in the process. Also on hand is giallo veteran Dagmar Lassander, who’d also appear in Fulci’s House by the Cemetery in the same year. And where else does one get to see Al Cliver of Zombie Flesh Eaters (1979) amusingly essay the role of an ‘English Bobby’?

No great classic, but worth a look. The box office failure of The Black Cat saw to it that Fulci was well in truly back in the gore game for his next opus.