Eurohorror of the Week: City of the Living Dead (1980) 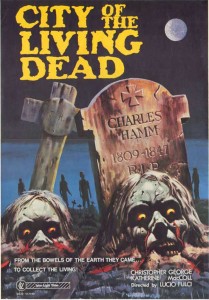 Lucio Fulci was at the top of his undead game when he re-teamed with uncredited Zombie Flesh Eaters (1979) scribe Dardano Sachetti to create this bizarre but even more nightmarish follow-up. With an atmosphere so thick you could stir it with a severed zombie arm, what City of the Living Dead (US: Gates of Hell) lacks in the logic stakes is more than made up for by its sheer malevolence. The doses of humour that are to be found are of course largely unintentional.

The suicide of a priest causes the dead to walk in the town of Dunwich. His death is witnessed in a séance by Mary (Catriona MacColl), a young psychic, who appears to die of heart failure on the spot. Luckily, as she awakes to find herself buried alive she’s rescued by cigar chompin’ crime journalist Peter Bell (Christopher George), who’s trying to get to the bottom of these odd goings on.

The two quickly learn that the death of the priest has caused the Gates of Hell to be flung open, and if they can’t somehow close them by All Saints’ Day the entire world will be engulfed by the maggot-ridden terrors of the underworld. Heading to Dunwich, they team up with psychiatrist Gerry (Carlo de Mejo) and his patient/girlfriend Sandra (Janet Agren) in an attempt to destroy the zombie priest and avert the impending apocalypse. 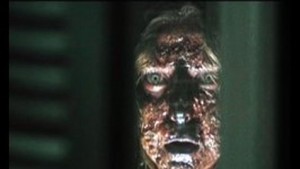 The irascible Maestro of Mayhem bravely decides to make a very different film from his hit of the previous year, eschewing the voodoo-led, EC Comics style action for a more Lovecraftian and surreal approach, but still goes all out to top even that past glory in the gore department. So, where Zombie Flesh Eaters had the infamous ‘splinter-in-the-eye’ scene, City of the Living Dead has ‘Daniela Doria barfing up her entire digestive tract’ and ‘John Morghen getting a huge drill through his head’ as show-stoppers.

The undead don’t get up to much flesh-eating here, instead providing some the few cinematic incidents of zombie teleportation (!), psychically causing the aforementioned guts vomit, and enjoying a nasty preponderance for crunching the back of your skull and coming out with a handful of brains. 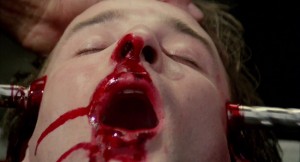 However, the rampant gore on display is just one element of Fulci’s nightmare building. The panning shots along mist-wreathed streets and graveyards find their perfect accompaniment in Fabio Frizzi’s doom-laden prog theme, which sends a chill down the spine whenever its opening bars are heard. The overall result is an atmosphere so transcendently ghoulish, crusty and maggot infested that you might feel like taking a bath 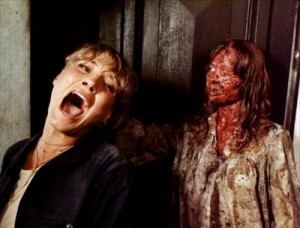 afterwards. Although The Beyond and House by the Cemetery (both ’81) stand slightly superior in terms of plotting, City finds the director’s horrific mise en scene at its most fully realised.

Apparently the zombies were only added to the narrative at the insistence of the film’s German financiers. Just as well, as it’s hard to imagine the whole thing working without Gino De Rossi’s gloriously icky creations.