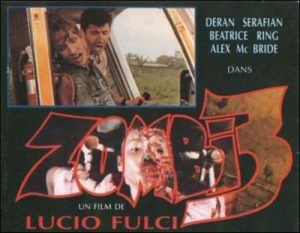 There had already been a couple of ‘ZOMBI 3s’ by this time this one saw the light of day; an Italian re-issue of THE LIVING DEAD AT THE MANCHESTER MORGUE (1974) bore that title, as did BURIAL GROUND (1981) in some quarters, but these retitled flicks simply didn’t carry that Fulci stamp of maggot-ridden authenticity.

This ZOMBI 3 was to be Lucio’s triumphant comeback and official sequel to 1979’s ZOMBI 2 / ZOMBIE FLESH EATERS (hence the UK video release title of ZOMBIE FLESH EATERS 2), but sadly the lack of any ties to the storyline of that past gory glory make it an ‘in-name-only’ affair. In addition to this, a bout of ill health forced the Maestro of Mayhem to exit the project with only 70-odd minutes in the can (although accounts vary). RATS: NIGHT OF TERROR (1984) and ZOMBIE CREEPING FLESH (1980) hack Bruno Mattei was commissioned by producer Franco Gaudenzi to add new scenes and re-shoot some of Fulci’s work. The film had been co-written by Mattei anyway, with frequent partner-in-crime Claudio Fragasso; director of the even worse AFTER DEATH (of the same year, later to be retitled ZOMBIE 4: AFTER DEATH / ZOMBIE FLESH EATERS 3), not to mention the infamous TROLL 2 (1990).

In a pre-credits sequence, a festering corpse in a top secret lab is injected with top secret serum: ‘Death One’. Initially this seems to have no effect, but suddenly the stiff jolts back to life, vomiting blood all over the shop and visibly putrefying in front of the stunned labcoats’ eyes, before sitting bolt upright. Cue title card, and we next see the zombie-creating serum stolen en route to an army base by a bunch of ecoterrorists. The soldiers manage to take most of them down, but one of their number cracks open the deadly cannister before escaping. 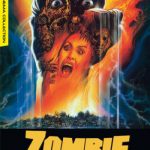 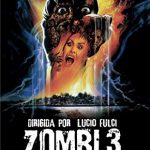 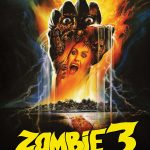 Holed up in a nearby hotel room, our desperado starts to display zomboid tendencies straight from the off and starts to spread the infection. Cut to a bunch of guys running around in biohazard suits, just like in ZOMBIE CREEPING FLESH, mopping up the local residents and throwing their corpses on a bonfire. A bonfire? Damn, anyone who’s seen RETURN OF THE LIVING DEAD (1985) knows the drawbacks to the old bonfire method.

Three GI Joes on leave roll into town just in time to save some field-trip teenagers from – gasp! – some attacking zombie buzzards. The army ruthlessly quarantines the area, with orders to”shoot anyone trying to leave the contaminated area. No one must get out alive. No one!” Yep, pretty unequivocal. The newfound friends’ lives are just as much in danger from the army as they are the increasing hordes of intestine-munchers roaming the area, and thus the stage is set for an hour of rushing around evading and battling both.

ZOMBI 3 is indeed much more similar to ZOMBIE CREEPING FLESH than any of Fulci’s earlier efforts, only not quite as much inept fun as that one was. Stefano Mainetti’s music score is underwhelming – a salient characteristic of Italian horror films of the late eighties/early nineties period. There are also some extremely poor zombies, nothing like Giannetto de Rossi’s blood curdling creations for ZOMBI 2, and worst of all they’re not even consistent. Some shamble, others run, the odd one can talk while others just groan. They’re still better than most of the zombies in AFTER DEATH. There’s a few delirious scenes, like the aforementioned bloodthirsty buzzards and, even better, a disembodied FLYING ZOMBIE HEAD – not to mention cinema’s first ZOMBIE DJ – but the whole affair doesn’t amount to a hill of beans. 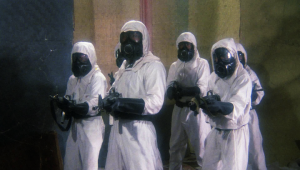 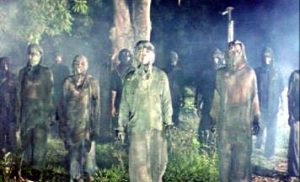 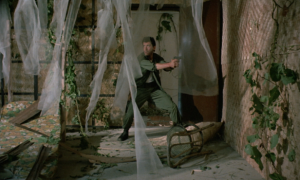 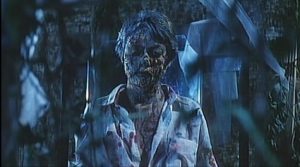 Interestingly, lead GI Deran Serafian is the son of VANISHING POINT (1971) director Richard C. Serafian (and nephew of Robert Altman), and himself the director of his own super-derivative B-movie, ALIEN PREDATOR (1985). These days he’s a big cheese in US TV, with recent directorial credits including episodes of ‘The Gifted’, ‘The Exorcist’ and ‘The Strain’. The shock ‘zombie birth’ scene towards the end of the film was replicated in Zack Snyder’s decent DAWN OF THE DEAD remake (2004); as George Romero’s original was the starting point for this orgy of living dead mayhem, there’s something strangely pleasing about this, as though it brings the whole Italian zombie cycle full circle.