Cujo is getting its first ever Blu-ray release in the UK next month, and the bonus features are utterly drool-worthy.

Eureka Entertainment are behind the release, and they have gone all out. In addition to a 1080p presentation of the Lewis Teague classic, based on the Stephen King book of the same name, the Blu-ray boasts over seven hours of bonus content. This includes several entirely new features, like interviews with the cast and crew and an exclusive feature-length audio commentary by Lee Gambin, who wrote the book Nope, Nothing Wrong Here: The Making of Cujo. 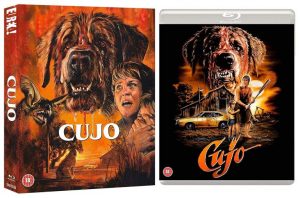 If you’re lucky enough to snag one of the special limited edition copies, you’ll get a hardbound slipcase showcasing newly commissioned artwork by British illustrator Graham Humphreys, and a reversible sleeve featuring both artwork by Justin Osbourn and the original poster. Restricted to 4,000 copies, the limited edition 2-disc set also includes a 60-page collector’s booklet, with new writing on the film by Gambin alongside author Scott Harrison and associate lecturer in film studies Craig Ian Mann. The collector’s booklet will also feature archival imagery from Cujo’s production.

Check out the HD trailer below for a complete list of bonus features. Cujo will be released on Blu-ray in the UK on August 29th, and you can pre-order your copy today.