Over the last couple of days we’ve been given both the poster and first trailer for Screen Gems’ Slender Man, the upcoming horror film based on the infamous and influential Creepypasta meme. 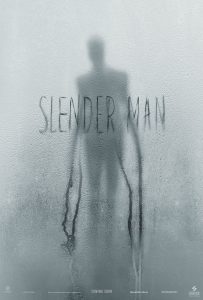 The trailer has a deeply haunting vibe and some nerve-jangling imagery, although it keeps the faceless, child-killing titular entity out of sight for the most part. The poster too, refuses to give too much away.

Synopsis:
In a small town in Massachusetts, four high school girls perform a ritual in an attempt to debunk the lore of Slender Man. When one of the girls goes mysteriously missing, they begin to suspect that she is, in fact, HIS latest victim.

Slender Man will be stalking cinemas from May 18th.