A film adaptation of Emily the Strange has been doing the rounds since 2008 with Dark Horse Entertainment. In 2010 it was expected that Universal would be releasing the film with Chloe Grace Moretz (Let Me In, Carrie) in the role of the title character. However, the film is on the move and has now found a new home at Amazon Studios.

As well as settling on a new studio, it has been decided that the film will no longer be live-action, but will stick more closely the original design and be adapted as an animation. This will be Amazon’s first venture in to the feature animation market, following Netflix’s steps as they recently acquired the US distribution rights to The Little Prince. 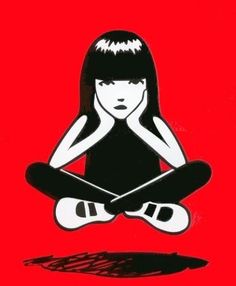 Emily the Strange first came in to the public eye in the 1990s and spawned a huge business in fashion, books and accessories. I think I had an Emily the Strange tee when I was about 14, so this is all very nostalgic!