Fans have been clamouring for a sequel to Phantasm director Don Coscarelli’s Bubba Ho-Tep since its release in 2002. While an onscreen follow-up to the well-loved Bruce Campbell-starring horror-comedy remains unlikely however, a prequel is on its way in comic-book form. 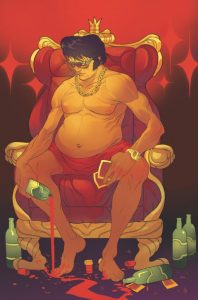 Bubba Ho-Tep and the Cosmic Blood-Suckers began life as a story by Joe R. Lansdale, who wrote the original novella which was adapted by Coscarelli for his cult film. The comic series was co-written by Lansdale with Joshua Jabcuga, and will see Elvis fighting to save the world from an extraterrestrial threat.

In the comics…
“President Richard Nixon has uncovered a potential threat from beyond the stars, but there’s only one man who could possibly safeguard the world as we know it: Elvis Aaron Presley.”

Lansdale broke the news to THR, telling the site “Bubba Ho-Tep was an accidental story that turned out to be my first film adaptation, and it’s still going strong in story and film. And finally, it has inspired a background story that was first a novel, and is now represented in the medium that first made me want to be a writer: Comics. Graphic novels. What we used to call Funny Books. I’m excited and looking forward to readers discovering it all in color and looking fine.”

Bubba Ho-Tep and the Cosmic Blood-Suckers will arrive in March 2018 from IDW Publishing.