Ellen Page in Talks to Star in Flatliners Remake 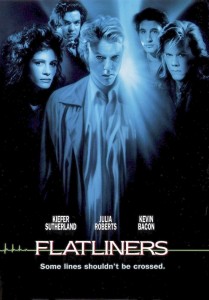 It’s another day, so another set of news regarding the next horror remake. This time it’s about the planned remake of 1990’s cult classic Flatliners. Neils Arden Oplev (Dead Man Down, The Girl with the Dragon Tattoo) is attached to direct the remake, with a script from Ben Ripley (Source Code). It’s an interesting duo currently at the helm, but  Source Code was a great piece of modern science-fiction back in 2011. Hopeefully will bring some of that unique storytelling to a new Flatliners and give it a bit of a refresh. He is currently working on the sequel to Source Code – nicely titled as Source Code 2, with director Anne Forester.

Ellen Page is currently in talks to feature in the Flatliners remake, which originally starred Kevin Bacon, Kiefer Sutherland and Julia Roberts. Page shot to our screens back in 2005 in the brutally terrifying thriller Hard Candy. She has since had parts in the X-Men films and Inception.

Flatliners has been in development since 2013, but there is no release date set in stone. Not yet, anyway.