Ellen Page Deals with a Zombie Aftermath in The Third Wave

Paris-based Bac Films has released the first image of Ellen Page in The Third Wave, which takes place in the aftermath of a zombie outbreak and is, just to be clear, completely unrelated to last year’s The 5th Wave.

The film sees humankind rebuilding after a zombie virus has been halted, with a number of people having seemingly been cured of their flesh-munching tendencies. The cured are still discriminated against by wider society however, and treated as second-class citizens. Page stars alongside Sam Keeley (Monsters: Dark Continent), Natalia Kostrzewa and Amy De Bhrún. 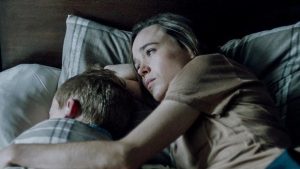 The horror-drama “Unfolds in the aftermath of a devastating virus which transformed the infected into zombie-like monsters. Mankind is struggling to rebuild societies deeply divided between the uninfected and those who did succumb to the virus and are still haunted by their violent actions. In the backdrop, the rise of a terrorist movement threatens to plunge the world into chaos again.”

The Third Wave is the feature debut of director David Freyne, who also scripted based on his 2014 short, The First Wave.

Footage from the film will be screened on the first and second day of the EFM later this month.