After 2017’s big-budget reimagining of The Mummy appeared dead on arrival, Universal’s Dark Universe dreams seemed, yet again, doomed to return to their restless slumber. But Universal surprised us all by going in a different direction: rather than sealing up their vault of classic horror, they tapped Leigh Whannell (Saw) to remake the iconic 1933 film The Invisible Man. Now we’re excited to hear that Elizabeth Moss (Us, The Handmaid’s Tale) has officially joined the cast—and she may even be playing the deceptive lead.

Reports that Moss was in early negotiations to star in the film began surfacing last month, but now we know for sure that she’s on board. And if the rumours about her role are true, it’s possible that the project may in fact be titled The Invisible Woman, though that has yet to be confirmed. Johnny Depp, who was attached to the project when it was still part of the Dark Universe, will reportedly not appear in the film. 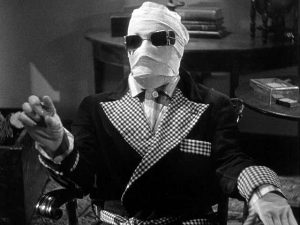 Whannell’s script for The Invisible Man is said to be highly character-driven, which is good considering it has a much lower budget than The Mummy (and we all saw how well a big budget turned out for that trainwreck). After directing Insidious: Chapter 3 and Upgrade, we’re looking forward to seeing what Whannell does with the material. The Invisible Man was originally directed by James Whale and starred Claude Rains in the title role.