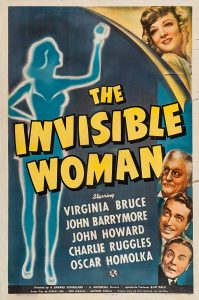 Ahead of the release of Leigh Whannell’s The Invisible Man, Universal Pictures has announced that it will also be putting a fresh spin on 1940’s Invisible Woman—and Elizabeth Banks (Charlie’s Angels) has been tapped to direct.

The film was based on an original pitch by Banks, who will also star. Her character will supposedly be the one turning invisible.

In the original movie, which was directed by A. Edward Sutherland, an attractive model (played by Virginia Bruce) volunteers the be the guinea pig for an invisibility machine. But she has ulterior motives.

The most recent draft of the script was penned by Erin Cressida Wilson (The Girl on the Train). The tone of the new film will supposedly be somewhere between Thelma & Louise and American Psycho.