Fan(boy) favourite Eliza Dushku (Wrong Turn, Buffy the Vampire Slayer, Open Graves) makes her return to horror in the upcoming Eloise, which now has this trailer ahead of its UK release in February.

Dushku is joined by The Covenant‘s Chace Crawford, Tropic Thunder‘s Brandon T. Jackson and Final Destination 5’s PJ Byrne as a group of friends who are forced to confront their darkest memories after breaking into the abandoned asylum of the title. Also co-starring is the T-1000 himself, Robert Patrick.

Here’s the official word:
“The film is set in a defunct insane asylum known as Eloise. Four friends break into the abandoned institution in hopes of finding a death certificate, which will provide Jacob (Crawford) with the rights to a sizeable inheritance. While inside the asylum, the group not only finds that the institution houses a horrifying history but also the truth about their own tragic pasts. They’re shooting in the Eloise Insane Asylum which was one of the largest mental institutions in the world. What began as one building in Westland, MI in 1832, rapidly grew into a 78-building self-sustained city, complete with its own fire and police departments, train station, post office and farms. Eloise closed its doors in 1982, and has since been dormant and left to ruin.” 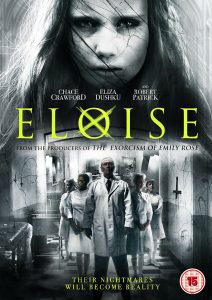 Eloise was written by The Vatican Tapes scripter Christopher Borrelli and directed by Robert Legato, an accomplished visual effects artist with two Oscars to his name, for his work on Titanic and Hugo.

Despite the film being rolled out internationally over the next couple of months, a US release for Eloise has yet to be announced.