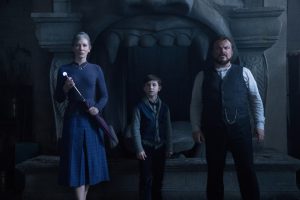 If asked, I remain insistent that Eli Roth has only directed one particularly good flick, that being his 2002 debut Cabin Fever. With his latest however, a change of tack, a strong cast and working under the Amblin name could see Roth onto a winner.

Eschewing the graphic bloodletting upon which Roth has made his name, The House with a Clock in its Walls is a family-friendly spooker along the lines of Goosebumps or hopefully, Joe Dante’s PG-13 works. We can now get our first proper look at the film with this first trailer, together with poster art and some stills. 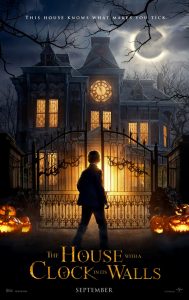 The film stars Jack Black and Cate Blanchett, as well as Kyle MacLachlan, Colleen Camp, Renée Elise Goldsberry, Vanessa Anne Williams. It sees Roth partnered with Amblin Entertainment, and is said to be very much in the style of classic Amblin adventures.

“The magical adventure tells the spine-tingling tale of 10-year-old Lewis (Owen Vaccaro) who goes to live with his uncle in a creaky old house with a mysterious tick-tocking heart. But his new town’s sleepy façade jolts to life with a secret world of warlocks and witches when Lewis accidentally awakens the dead.”

The film was written by Supernatural creator Eric Kripke, based on the ‘70s children’s book by John Bellairs. It lands in cinemas on September 21st, from Universal Pictures.