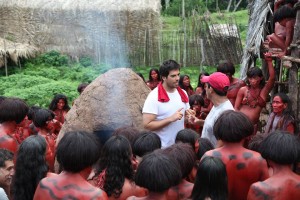 It’s been a long wait for this film for fans of Eli Roth, but your patience is finally being rewarded as Roth announced that The Green Inferno would officially be released this year.

The accolade to cannibal films was originally meant to be released a few years ago but was held back until last year. It was then still not released due to an altercation between a financer and Open Road that ended with the distributor pulling the film.

Eli Roth took to Facebook to air the news that Blumhouse Productions are putting the film back in our calendars and on at the theatres. Roth stated that The Green Inferno would be out on September 25th 2015, with no VOD plans yet decided.

If you want to see the gore master himself announcing the good news, then check the video out on his Facebook page: https://www.facebook.com/RealEliRoth?ref=ts&fref=ts