Synopsis:
After attempting to cross the US/Mexico border, Armando awakens with a Lucha Libre mask sewn into his neck. He attempts to escape, but is surrounded by a sadistic family, who watch him with hungry eyes. The only chance for Armando’s survival in this hellish nightmare is to last in a wrestling match against the most terrifying villain of all: GIGANTE!

EVIL HAS A NEW MASK!

Directed by Gigi Saul Guerrero and based on the opening chapter of Shane McKenzie’s novel “Muerte con Carne” (Death with Meat) – a book featuring a quote from none other than Jack Ketchum asking how the hell McKenzie can even sleep at night – LuchaGore’s latest endeavour, the short film El Gigante, is a wrestling match made in Hell.

When the original novel first came out critics suggested McKenzie had created a horror icon to rival Victor Crowley, Jason Voorhees, and Leatherface and this short does nothing but reinforce such a bold statement. Sporting a Lucha Libre mask and resembling Mad Max’s Blaster sans Master, El Gigante is the total package, ripping illegal immigrants to shreds in the most gruesome five moves of doom ever witnessed in wrestling history. Something tells me he has yet to win a match by pinfall. 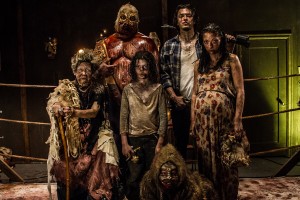 If I’m completely honest, the idea of a gruesome bloodbath in the wrestling ring had me expecting something a bit too madcap for my liking but I couldn’t have been more wrong. The wise inclusion of a cutting social commentary, a constant pitch black tone and sheer grotesquerie keep things bleak and sinister throughout. This foreboding quality is perfectly complemented with a deranged crowd cheering El Gigante on, all of whom could very well be related to a certain Sawyer family hailing from Texas.

Luke Bramley’s cinematography is flawless with a dark and almost apocalyptic feel to it and really showcases his skills when it comes to shooting wrestling action in all its brutal glory. Unlike a lot of action-packed movies where we’re hard pressed to see what the hell is actually going on, here the action is shot (and edited) to perfection to provide some satisfyingly coherent carnage overload, all buoyed by some astounding practical makeup effects.

Fans of films like the aforementioned Texas Chainsaw Massacre or House of 1000 Corpses need to jump into the ring with Saul Guerrero and Bramley right now as this is the top contending tag team who I have no doubts will go on to much, much bigger things. El Gigante will leave you hankering for more rounds with this new-found horror icon and his family of flipped out ringside fans so what better note to finish on than news that a feature-length film is on the way?

We’ll leave you with the trailer below just so you know what you’re missing out on if you haven’t yet seen the short: